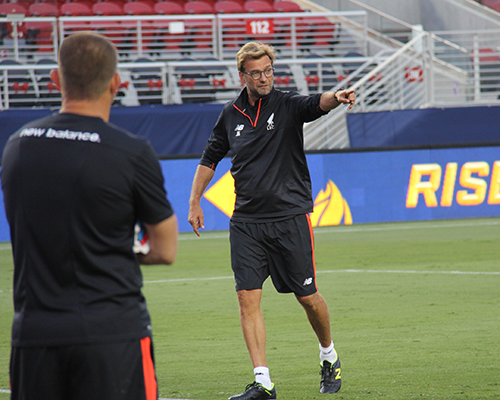 Jurgen Klopp is still optimistic Emre Can will remain at Liverpool despite ongoing uncertainty surrounding the midfielder’s future.

The Germany international has entered the final 12 months of his current contract to raise the possibility of Can leaving for nothing next summer.

The 23-year-old has been linked with a potential move to Serie A champions Juventus over the past 12 months or so to raise concerns about his long-term future.

Can has made two assists in eight appearances in the Premier League this term to make a decent start to the 2017-18 campaign.

Asked about whether an update on Can’s contract situation with Liverpool, Klopp told his pre-match media conference ahead of Saturday’s trip to West Ham:

“There is nothing new. I’ve said it a few times and I’ll say it again: it is our job to make this club as exciting as possible,” Klopp said.

“He is also allowed to sign a contract with us in May as a player who is still already here.

“I have no problem with that. As long as Emre doesn’t give me one sign his mind is somewhere else I don’t have to talk about this, it is a normal thing in football.

“That is part of football. If it happens like this we can’t change it. If a player is ending his contract next summer and he is good then we should try to do the same so that is an opportunity for all of us.

“We have to respect he is ending his contract and that is how it is. The two sides could do things differently: one is the club, one is the player.”

The Reds signed Can in an £8.75m deal from Bayer Leverkusen in the 2014 summer transfer window.

The Merseyside outfit signed four players in the summer transfer window to improve their squad ahead of a return to Europe’s premier club competition.