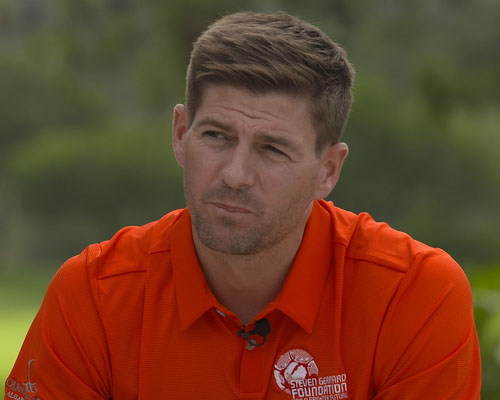 Steven Gerrard has admitted that his infamous slip against Chelsea will haunt him until the day the Liverpool legend dies.

The 35-year-old midfielder appeared to be on the brink of ending his career-long wait to win the Premier League in April 2014.

Liverpool needed to avoid defeat by Chelsea to remain in control of the title race but Gerrard’s slip allowed Demba Ba to put the visitors 1-0 up at Anfield.

I think to myself if I’d have got that league it would have been the icing on the cake. But what helps me with it is that I’ve got the cake

The former England man and his Liverpool team-mates were unable to get back on level terms in the remaining 60 minutes before ex-Red Fernando Torres scored a late second.

“I’ve got memories, good memories that will live with me forever but that is one moment will always hurt me until the day I go and it’s because if I’d have got that moment, I’d have achieved every dream with Liverpool. And as a man it hurts,” Gerrard told Rio Ferdinand as part of ‘Rio Meets Steven Gerrard’ which will air on BT Sport tonight at 10pm on BT Sport 1.

Gerrard admitted Liverpool underestimated Chelsea manager Jose Mourinho’s ability to spoil their party, adding that the Reds got their tactics wrong against the west London side.

“Well I think that game against Chelsea with the slip and I think our tactical approach was probably inexperienced for the whole game,” Gerrard continued.

“Going out to try and blow Chelsea away. A lot of teams we played prior to that game were blowing them away comfortably.”

Gerrard added: “Going into the Chelsea game because we were in a good run and good form and no fault to Brendan at all, but we went in with the same tactics, you know? We heard Chelsea possibly making a few changes and we actually have the confidence we can blow them away but I think sort of underestimated the power of Mourinho.

“He came and he spoilt the game. He ruined it. He had them very hard to beat. He had all the units. He spoilt the game and he even said after he was quoted we came to spoil the party. The slip happened at a bad time, it was cruel for me personally.

“There’s not a day that doesn’t go by that I don’t think about what if that didn’t happen. Would things have been different? Would it have turned out different? Maybe it might of, I don’t know.

“But even still it happened after half an hour and we still had the time to get the draw we needed and the inexperience showed from myself having not been in many title races and the inexperience of the team, our reaction was to go chase it and hunt it down and try and make up for that cruel moment and we lost our way. We went gung ho instead of being more controlled and maybe just being a little bit more calculated in the way we went about it for the equaliser.”

The former Reds captain was taunted about his career-defining slip at most stadiums in the Premier League last season, but Gerrard wasn’t fazed by the jeers aimed in his direction.

“I think you’ve got to be thick skinned and take a bit of criticism along the way,” said Gerrard.

“I’m not scared of any criticism or any cruelty I understand the moment and impact it had it kills me, don’t get me wrong, inside it kills me and it will do for a long time. I think to myself if I’d have got that league it would have been the icing on the cake. But what helps me with it is that I’ve got the cake.

“I’ve achieved a lot of dreams with a team that has never ever been the favourite.”

Gerrard is set to link up with his new LA Galaxy team-mates in the coming week.