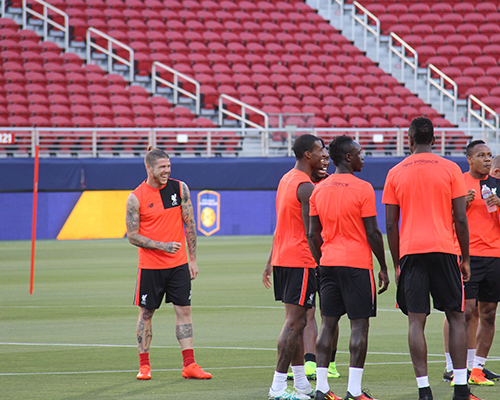 The Reds made a disappointing start to their first European clash since 2015-16 when Wissam Ben Yedder finished from close range in the fifth minute.

However, Liverpool, who lost 5-0 to title rivals Manchester City last weekend, didn’t dwell on the setback as Roberto Firmino, Mohamed Salah and Sadio Mane started to put the Sevilla defence under pressure.

But it was Moreno who provided the pass to unlock his former club’s back four after the Spanish full-back burst past the Sevilla defence to cross for Firmino to equalise in the 21st minute.

The 24-year-old proved a constant threat bursting down the left wing as the Spain international impressed against the 2016 Europa League winners on Wednesday night.

Former Liverpool midfielder McManaman was quick to heap praise on Moreno for his role in Firmino’s equaliser.

“Well played Alberto Moreno for being in the right place and more importantly putting it on a plate for Liverpool’s number nine,” McManaman told BT Sport.

Mohamed Salah’s deflected strike handed the home side a 2-1 lead but Joaquin Correa equalised in 72nd minute of the second half at Anfield.

Moreno moved to Liverpool in a £12m deal from Sevilla in the 2014 summer transfer window.

The Reds signed Hull City defender Andy Robertson in an £8m deal in the summer to provide Moreno with more competition.

Steven Gerrard: Why Man United striker worries me as a Liverpool FC fan