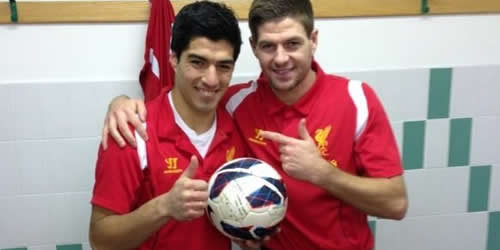 The 33-year-old Reds skipper produced a man-of-the-match display and had a hand in all four goals as Liverpool routed Fulham at Anfield on Saturday.

The home side’s opening two both came from set-pieces as Fernando Amorebieta headed into his own net from Gerrard’s corner before Martin Skrtel guided his captain’s free-kick past Maarten Stekelenburg.

And Rodgers wants his players to continue to make the most of Gerrard’s inch-perfect dead ball delivery over the course of the Premier League season.

“I’ve said to the players that after being here a year and having assessed Steven, I felt that his delivery is as good as it gets,” Rodgers said.

“There’s no-one who delivers a ball like Steven Gerrard. I felt the other players weren’t utilising the quality that we have in his delivery.

“I just asked the players to be much more aggressive when they try to attack the ball; try and win the battle with your defender; try to use your arm to get to the ball [ahead of the defender].

“Every week, I tell him where I want the ball and he puts it there and you’ve seen in the two goals – a free-kick and a corner – we’ve got incredible quality on his delivery.”