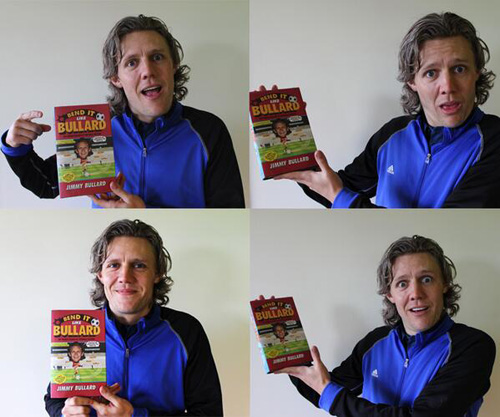 Jimmy Bullard shows off his autobiography, 'Bend It Like Bullard' Photo: Jimmy Bullard/Twitter

The 26-year-old Saints skipper has been linked with a £20m move to Liverpool in recent weeks as Reds manager Rodgers attempts to strengthen his midfield ahead of their return to the Champions League.

If plays as well as I think at the World Cup, Brendan will want to get him sharpish

Lallana was named in the PFA Premier League team of the year after the Southampton youth graduate scored nine goals and made six assists in 38 top-flight appearances this season, earning a World Cup call-up.

And former Fulham midfielder Bullard, who has just released his autobiography called ‘Bend It Like Bullard’, backed Liverpool’s pursuit of Lallana and claimed the playmaker is a special English talent.

“He has to go and get him – an absolute player. I’m having him. [Roy] Hodgson has to be looking to play Lallana from the start [at the World Cup]. He is unbelievable,” Bullard told The Sport Review.

The former Wigan Athletic star continued: “He will be [a star]. Believe me. If he plays as well as I think at the World Cup, Brendan will want to get him sharpish because there will be a lot more clubs after him following the World Cup.”

Bullard, who received a call-up to the Three Lions squad in 2008 under Fabio Capello but didn’t make an appearance for his country, can’t recall any previous England players that boast the same qualities as Lallana.

“I haven’t seen any England player move like he has for a long, long time. He is proper,” Bullard added.

“He doesn’t remind me of anyone. He has his own way of playing and belief; he is leggy, skilful, strong and he skippers the side so he has loads of experience.

“Even the goal he set up for England – the Cruyff like cross. There isn’t a lot of players who can do that and on such a stage. He will be [the surprise package of the World Cup].”