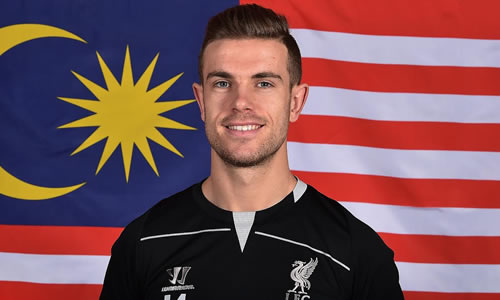 Jordan Henderson has declared his desire to extend his Liverpool contract for “many years”.

The 24-year-old midfielder has established himself as a regular in Brendan Rodgers’ side this season and has been tipped to become a long-term replacement for departing captain Steven Gerrard.

The England international’s contract is due to expire at the end of next season.

However, the former Sunderland man says that he will not let his contract negotiations get in the way of his performances for club and country.

“It’s definitely not an issue,” Liverpool vice-captain Henderson is quoted as saying by Goal. “I love playing football for Liverpool and I want to be there for many years.

“In terms of my contract, I think everybody else will make a big deal of it. But, for me it’s just letting my agent and the club talk, and whenever it gets sorted it gets sorted.

“All I want to do is my best for club and country. It’s definitely not a distraction. For me playing football is all I’ve ever wanted to do and contracts and stuff can be sorted out by clubs and agents.

“Hopefully this can get done soon. All I want to do is concentrate on my football and not let this get in the way.”

Henderson started England’s 4-0 win over Lithuania on Friday night and played 71 minutes at Wembley as Roy Hodgson’s men wrapped up an emphatic victory.

The midfielder will be hoping to feature for Liverpool when the Reds take on Arsenal at The Emirates on Saturday afternoon.

Henderson has made more than 130 Premier League appearances for Liverpool since joining the club from Sunderland in June 2011.