Liverpool transfers: Victor Valdes says Reds goalkeeper Pepe Reina would be a good candidate to replace him at Camp Nou 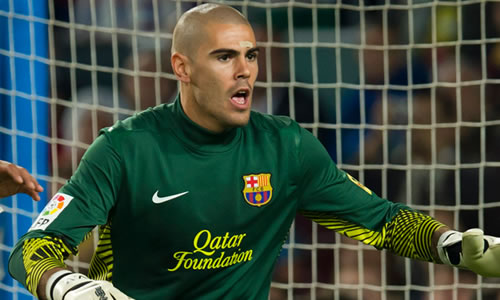 Victor Valdes has said he will not renew his Barcelona contract Photo: FC Barcelona

Víctor Valdes believes Pepe Reina would be a suitable candidate to replace him at Barcelona when he leaves Camp Nou.

The Spanish goalkeeper confirmed last week that he does not intend to renew his Barca contract, which expires in June 2014.

Speculation linking Reina with a transfer to the club where he began his career as a youngster is nothing new – and Valdes says his compatriot would be a worthy successor to him when he quits the club.

“I owe a lot to Barcelona but I will leave before 2014,” Valdes is quoted as saying by Metro.

“But Pepe Reina can replace me. He is an international who has earned his spurs already.

“Plus he knows this club. In the past we have played together here.

“Reina is a good friend of mine and I’m sure he can play anywhere in the world if he wants to.”

Reina was earlier this week quoted as saying that he would find it difficult to say no to Barcelona if they were to lodge a bid for the 30-year-old.

“It is difficult to say no Barca although I am not aware if they are interested in me,” said Reina.

England won’t be a real threat at the World Cup, says Brazil’s Neymar