Rafael Nadal withdraws from the Olympic tennis tournament, saying he is "not in a condition" to play at London 2012 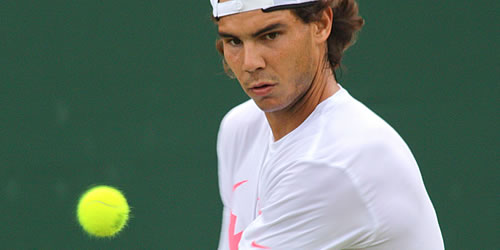 Rafael Nadal, winner of the tennis singles gold in Beijing in 2008 and nominated to carry the Spanish flag in this year’s opening ceremony, has pulled out of the London 2012 Olympics.

He made his announcement today on the Spanish federation website, saying: “I do not find myself in a condition to compete. It is one of the saddest moments of my career.”

Nadal made a shock second-round exit to the world No100, Lukas Rosol, at the Wimbledon Championships a fortnight ago, though there was no immediate sign of the knee tendonitis that has affected his career in the past.

But alarm bells rang when he announced, a week later, that he was pulling out of the charity match he was scheduled to play against Novak Djokovic at Real Madrid’s Bernabeu stadium a few days ago.

He revealed that doctors had recommended 15 days of rest before he could return to training for the Olympics.

As recently as last weekend, at a ceremony to receive his national flag from the Spanish Olympic Committee, he still expected to compete: “I am doing everything possible to recover. After Roland Garros I had a difficult time but the excitement is at its maximum, I am working as hard as I can and hopefully I will be at 100 per cent.

“I am the one who is most worried. I hope that things improve and my intention is to arrive in London well prepared and recuperated.”

In his statement today, however, he revealed that he would have to give way to one of his compatriots: “I have to think about my colleagues. I cannot be selfish and I have to think of the good of Spanish sport, especially Spanish tennis, and let a team-mate who is better prepared to compete.

“I’ve waited until the final moment of my preparation and my training, but I cannot do it.”

In expressing his sadness, there were echoes of his last-minute withdrawal from Wimbledon itself three years ago when he was unable to defend the title he had won there in 2008.

Nadal recovered well from that disappointing 2009, returning without his familiar knee strapping to reach the semis of the US Open, leading Spain to Davis Cup victory and then putting together one of his best seasons in 2010 that included three Grand Slams at Roland Garros, Wimbledon and the US Open.

He has since, though, become one of the most vociferous critics of the tennis calendar and of the proliferation of stressful hard-court tournaments.

His schedule this year has been a challenging one, too, as he sought to get back on terms with his 2011 nemesis, Djokovic. The two men were part of the longest Grand Slam final at the Australian Open and Nadal subsequently took several weeks off to sort out some physical niggles before hitting the North American Masters double-header.

There, he lost to Roger Federer in the semis of Indian Wells and continued to show signs of wear and tear in Miami, finally pulling out of his scheduled semi against Andy Murray with a left-knee problem.

He nevertheless assured the Spanish media: “It is nothing other than what I had before, but the tendons are much better than three years ago. Treatment works.”

That certainly seemed to be the case as he took on an intense and successful schedule on his favourite clay. As well as defending his titles in Monte Carlo and Barcelona—beating Djokovic in the final of the former—he went on to win back his Rome title without losing a set, despite playing Tomas Berdych, David Ferrer and Djokovic in succession. Finally, he won his seventh French Open title, again beating Djokovic, across two rain-soaked days.

However, the quick switch to grass that follows the culmination of the clay season revealed a weary Nadal. He lost in straight sets in the quarterfinals of Halle, and at Wimbledon, he went 4-0 down in the opening set of his first match before recovering to win in straight sets. Then came his five-set loss to Rosol in the next round, and he has not played since.

Just as Nadal was announcing his withdrawal from London 2012, the All England Club, which is hosting the Olympics tennis event, was making its own momentous—and rather timely—announcement. From 2015, Wimbledon will begin a week later to allow players more time to recover from the French Open and make the transition from clay to grass.

But only time will tell whether Nadal’s knees will survive long enough to benefit.