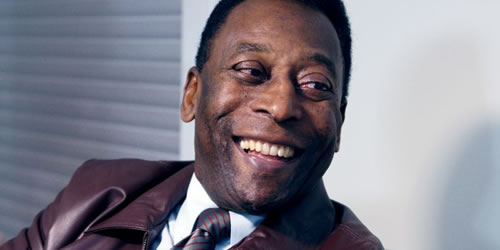 Pele was left impressed by the organisation of the London 2012 Olympics Photo: Handout

Pele believes the success of London 2012 has set a benchmark for how future Olympics will be judged.

The Brazilian football legend, widely regarded as the greatest player of all time, cited the opening ceremony and the feel-good atmosphere around the Games as something organisers should try to emulate as Brazil hosts the 2014 World Cup and 2016 Olympics.

Attention will turn to the South American nation’s readiness after the symbolic torch hand-over during Sunday’s closing ceremony, an event which triggered speculation over London’s readiness to host the Games when Boris Johnson accepted the Olympic flag in 2008.

With the 2012 Games now over, the three-time World Cup winner believes Locog has given Britain something to be proud of, and believes Brazil will benefit from what has been on show in London.

“We have a lot of people working to make Rio a great Games. I think the organisation here has been fantastic,” said Pele, speaking at a press conference to promote a new four-year partnership with London-based MediaCom.

“The opening ceremony was fantastic. It was really special, the whole stadium was full and everybody was really nice and friendly.

“Everybody enjoyed it, which is a good thing. The organisers should be very happy with that, and I think the same company that helped out here will go to Brazil so hopefully they will make it the same sort of event because they were very good.

“They have definitely set an example of what you need to do.

“The Rio Games are not just about Brazil, but about the whole of South America – much like the World Cup in South Africa.

“Brazil has a very big opportunity with visitors coming. We have a lot to show the world and I think that will be one of the things people realise.”

The efficiency with which London has dealt with the Olympics has been praised around the world, eradicating pre-Games fears of problems with transport and security.

And although there are nagging questions lingering about Brazil’s capacity to host both competitions, Pele believes it is far too easy to jump onto the bandwagon and criticise a host nation.

“The same questions are raised by most Games – I think London was an exception that was ahead of schedule. Host cities usually come together at the last minute,” he added.

“I spoke to President Dilma and she says the best people are working on both the World Cup and Olympic bid, and that we will be ready in time for sure.

“The stadium construction is not going to be a problem. At the moment of course we’re not ready, but nobody would be ready yet.

“There’s no doubt we will be ready, but any bid goes through problems in the build up to it because you are always adjusting and changing things.

“There’s always work to do and if we work hard we can deliver a really good World Cup and Olympics.

“The only problems are really administration problems, but these can easily be fixed with time.”

The only media agency working with Pele, MediaCom Sport will support future global brand extensions for this international sporting icon with opportunities for global brands to partner with Pele in the build-up to the Brazil World Cup 2012 and the Rio Olympic Games 2016. MediaCom represents $25bn advertising spend per year and works with global advertisers such as Procter & Gamble, Dell and Volkswagen Group. Pele will work alongside a variety of clients and across multiple markets.

Frank Lampard: I can play at top level for a good few more years