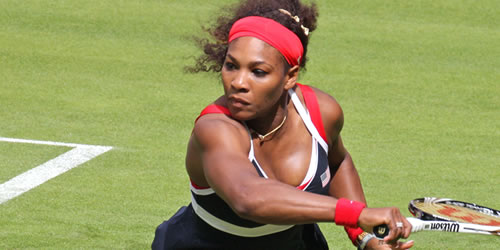 Serena Williams had the look of the queen of the court even before the women’s final of the London 2012 Olympics had begun at the home of tennis, Wimbledon.

Though she faced one of the tour’s favourite daughters, the statuesque, confident figure of Maria Sharapova, it was the 30-year-old American woman, who won her fifth singles title on this same Centre Court exactly four weeks ago, who had the bearing, the look and the composure of one who knows, quite simply, that she is the best.

She had even crowned her US colours of red, white and blue with a gold hair band that fought to contain her mass of dark curls in the swirling winds.

It was little wonder Williams looked so confident. She had dropped just 16 games in the five matches that had got her to the final, taking her to 33 wins in her last 34 matches. Indeed she had followed her Wimbledon triumph with a quick hop back home to the US to successfully defend her hard-court title in Stanford.

And with every successive round, she seemed to play better. Against a hapless Victoria Azarenka in the semis, she took just an hour to hit 33 winners, including 16 aces, in her 6-1, 6-2 win.

Sharapova, though, was also in strong form and, with the French Open title completing her Grand Slam set this year, she was, like Williams, playing for the “Golden Slam”. But…

The Russian had lost eight of their 10 previous matches—including the last eight and on all surfaces. She therefore had to open strongly and aggressively, which she tried to do. But Williams dominated from the off not only with her trademark serving and power off the ground but with her entire game and that unquantifiable component, physical presence.

The American held her opening serve, helped by a couple of aces, and proceeded to break Sharapova straight away. With another hold, she was quickly 3-0 up, and then she powered her way to two more break points in the fourth. Williams converted the second with a huge forehand winner onto the baseline and held again, to leave the Russian serving to save a whitewash first set.

Sharapova, now with the strong wind to her back, looked as though she would hold, too, taking a 40-0 lead, but three blistering returns from Williams pulled it back to deuce.

Sharapova took the advantage only to fire a double fault in increasingly difficult conditions, while Williams seemed able to power through the wind. She hit a backhand winner onto the baseline for set point and finished off with a volley winner to take the 6-0 lead in half an hour.

The Williams count was already eight aces, with almost half of her 31 points coming from outright winners. Indeed she had accumulated more winners than Sharapova had scored points.

Sharapova was not the first to suffer such an ignominious scoreline. Williams had dealt out the same “bagel” treatment to Vera Zvonareva in Round 3 and Caroline Wozniacki in the quarters. So the question now was whether the No3 seed, who could reclaim the No1 ranking along with the gold medal, would do any better than those who had gone before.

It looked unlikely 10 minutes into the second set. Williams held her opening serve with ease and again broke the Russian’s first service game. But eventually, in the fourth game and 0-3 down, Sharapova managed to get into a few rallies, worked some openings and forced a couple of Williams’ errors to take her first game. She was cheered to the rafters, but could Sharapova find more?

It looked promising when they headed to deuce on the back of a Williams double fault. A first roar of “Come on” from Sharapova indicated a first break point, and an even bigger roar marked a huge serve and volley play from Williams to save it.

A backhand into the net from the American gave Sharapova another bite of the cherry but she could not control a forehand in the wind and Williams held—now back wearing her “game face”, not a flicker of emotion.

That marked Sharapova’s one and only opening. Two double faults contributed to yet another break and Williams served for the set. Sharapova took the opening point with a backhand winner down the line—a reminder of the aggressive shot-making that had brought her this far. But a superb rally from Williams, tracking down some big forehands from the Russian, was followed by an ace down the centre of the court to bring up two match points.

Appropriately, it was another huge ace that sealed the 63-minute, 6-0, 6-1 victory in a truly impressive display by the finest female player of her era.

Appropriate too, the victory meant that Williams became only the second player in the Open era—Steffi Graf was the other—to complete that very special combination of all four Slams and Olympic gold.

Williams had joked after winning Wimbledon last month—when she equalled her sister Venus’s tally of five Wimbledon singles trophies—that she always had to do everything that her sister had done—and Venus won singles gold 12 years ago in Sydney.

Now Serena has matched Venus’s Olympic success and, in the process, has overtaken her elder sibling to hold more titles than any other active woman player—44.

The Williams sibling rivalry may be intense but make no mistake: These two women are each other’s biggest fans. Both have suffered injury and illness and both have supported one another through thick and thin.

How appropriate that, in the venue they have dominated between them for a dozen years, their search for a third gold medal together in the doubles still continues—and they are favourites to win that, too.