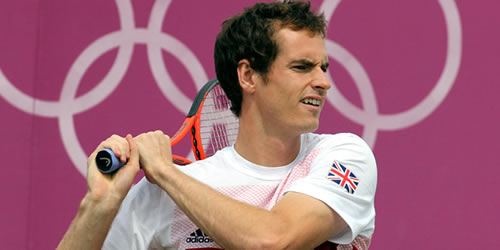 For Roger Federer and Andy Murray, this was not about money: There is no financial prize at the Olympics.

Nor was it about ranking points: Even the gold-medallist earns fewer than the winner of one of tennis’s nine Masters tournaments—just 750 points.

It was not even about the record-books, though Federer was seeking the only singles trophy missing from his cabinet and Murray was aiming to better the last tennis medal—silver—won by a British man, exactly 100 years ago.

It was, for these two tennis players as much as for every other athlete in the London Olympics, simply one of the most important moments in their careers.

That this emotional confrontation should be a replay of their highly-charged Wimbledon final exactly four weeks ago—within precisely the same grass rectangle that sits at the heart of tennis—added one more colour to this vibrant tennis tapestry.

On one side, Wimbledon champion Federer had won it all—except this. Having played in three Olympics before, and tasted gold in the doubles in 2008, he now had his first—and almost certainly his best—chance to win the one he wanted more than anything: singles gold.

On the other side, Murray, the loser here one month ago, had won the hearts of the British nation with his bold tennis and his tear-stained thanks to the crowds. He would now attempt to become their first gold-medal winner since the Olympics were last held at Wimbledon in 1908.

And should anyone still doubt the fervour of either man, their reactions to winning the semi-finals that ensured an Olympic medal spoke volumes.

From Murray, playing some of the best and most pumped-up tennis of his career to beat Novak Djokovic: “After what I experienced tonight, [winning gold] would be right up there with anything else I could achieve in tennis…it was one of the most emotional [moments] I’ve had after a match. You don’t see me smiling that much normally—I haven’t stopped smiling since I came off the court!”

From Federer, uncharacteristically demonstrative in kissing the Swiss emblem on his shirt after his marathon effort over Juan Martin del Potro: “I couldn’t be more happy and more pleased. It’s a big moment in my life and a big moment for Switzerland. I was drained, very tired, and at the same time very proud – equal to a Grand Slam final for sure.”

So who could channel their emotions the better in this battle for gold? Who could maintain their energy and their focus as they moved from a best-of-three format to the Grand Slam style best-of-five? Could the crowd carry Murray to the ultimate prize? Or would the lure of gold help the “emotionally extremely drained” Federer, 31 in three days’ time, to bounce back from a four-and-a-half hour semi?

It was Murray, a still centre in the British gold-rush that was sweeping London 2012, who opened serve but it was Federer who looked sharp as a knife, picking off a high smash, rushing the net and earning two break points. But he raced to the net too rashly on his second chance and Murray passed him and served a 130mph ace to hold.

Federer seemed to have no such problem, finding two aces in a love service game but, now settled, Murray switched on the attack button that had reaped great rewards against Djokovic. It earned him a break point in the fourth game, snuffed out by an ace, and he continued the all-out attack in the sixth, playing through four deuces to earn two break points. Murray pounded deep to the Federer backhand and drew the required error to break.

Murray was challenged again but came up with a 135mph ace to defend deuce on his serve and then another to take a 5-2 lead. Not content with such a crowd-rousing start, he broke again with his 11th winner of the match to take the first set, 6-2.

If the blood was pumping strongly through the Murray veins in the first set, it went in to overdrive in the second. Helped by two net cords, he went 40-0 up on Federer’s opening serve and made the break, 2-0.

It was then Murray’s turn to confront two break points in the third game but he withstood the bombardment from the Federer forehand. A passing forehand down the line gave Federer another chance—and then two more. Again Murray held off the No1 seed and an extraordinary backhand exchange—what looked a clear down-the-line-winner from Federer returned with a reactive counter down Federer’s line—and he consolidated a 3-0 lead.

In truth, Federer was not playing badly. He attacked at every chance and found good depth and variety from the baseline, particularly on the backhand wing. But Murray was, quite simply, playing at a constantly high level, defending with resilience and—key to his success—attacking with an aggressive game plan.

Again in the fourth game, Federer faced two break points, the victim of a Murray lob dropped onto the baseline backed up a multitude of groundstroke winners. The pressure told and Federer double faulted to go 4-0 down.

Where Murray had initially played strongly to the Federer backhand, he now drew errors from the forehand, too, as the Swiss tried to stem the Murray surge with outright winners from his signature shot but he over-hit time and again.

Another huge Murray serve took the score to 5-0 before Federer stopped the run of nine straight games with his first game in almost an hour. But he was playing the role of Canute, and he would not stem the British tide.

Federer earned a break point in the seventh game with a brilliant drop shot, but two more long forehand returns of serve gave Murray the set, 6-1.

The Wimbledon champion’s body language gave little away. His face as he stepped up to open the third set looked just as it had at the start of the first, yet his head must surely have been in turmoil. He won a quick love service game but a netted backhand, his 23rd unforced error, concluded a love hold for Murray, too.

Federer opened the third game with a 24th error, this time off the forehand. Then he pushed a forehand volley wide for 30-30. He held, but another forehand fired wide rounded off one more love service game for Murray.

In contrast, the British man seemed able to hit forehand winners from everywhere, now from well behind the baseline, next a mid-court gem that landed at the feet of the incoming Federer. That brought up two break points but Murray needed only one, taken with an angled cross-court backhand.

It was the decisive break and, with the prize in sight, Murray speeded up the pace towards his pot of gold. He stepped into the court and fired first a drive volley onto one sideline and then a backhand onto the other to take his fourth straight service game without dropping a point.

Federer fought off another break chance in the eighth in one of the rallies of the match: He lacked Murray’s energy but not the will to resist to the end. He threatened to break back but once more, the famous Federer forehand floundered—one into the net, one wide—and Murray held, 5-3.

Federer’s last resistance came with a love service hold, and that gave Murray the stage to serve out with a flourish appropriate to such a momentous match. An ace, like a golden bullet, brought the match to its climax, and had the roof not already been opened to welcome in the sunshine, it would have been blown off by the cheers.

In the end, it seemed like destiny. Murray, on Wimbledon’s centre court and with a nation’s support—and many more besides—won his biggest prize by beating first Djokovic and then his Grand Slam nemesis, Federer, simply by playing the best tennis of his career.

He called it “the biggest win of my life” and it will surely be the perfect launch pad for his first Grand Slam, so roll on New York and the US Open. But for now, Murray can finally celebrate Wimbledon and Olympic success in one golden moment.