With the London 2012 tennis tournament less than a week away, Marianne Bevis looks at the British women's chances 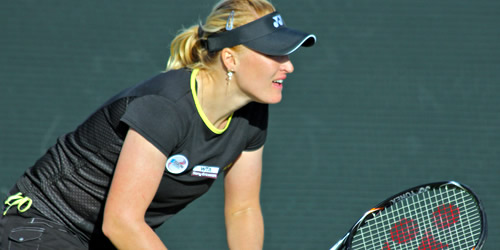 Elena Baltacha has been given an ITF place in the London 2012 singles Photo: Marianne Bevis

Andy Murray’s fine achievements on the courts of the world in the last 12 months have rightly been capturing the tennis headlines throughout the Olympic home nation.

He reached his fifth straight Grand Slam semi-final at the Australian Open in January—losing to eventual champion Novak Djokovic in a dramatic five-setter—and became the first British man to reach the final at Wimbledon earlier this month since 1938.

As he said after his loss to Roger Federer on Centre Court on Wimbledon’s final Sunday, “I’m getting closer,” and both he and a nation believe he has a chance for medal success when he returns to the All England Club next week.

There are also good prospects for the British men in doubles, as Murray teams up with brother Jamie—winner of the 2007 Wimbledon mixed doubles with Jelena Jankovic—and Colin Fleming joins forces with Ross Hutchins in a pairing that is 12th in this year’s ranking race. The Fleming/Hutchins duo has already won titles on Eastbourne’s grass and on the hard courts of Delray Beach, and reached the finals on the grass of Newport just last week.

But the GB squad has much to celebrate—and anticipate—in women’s tennis too. For the first time in 20 years, Wimbledon celebrated four Brits in the top 100, and all of them will play in the Olympics.

Two of the women, Anne Keothavong and Elena Baltacha, are veterans of the tour and former British No1s. The other two, Heather Watson and Laura Robson, were not even born the last time four British women had top-100 spots at the same time.

The signs for the home squad had been increasingly good all season. In the Fed Cup, under the new captaincy of Judy Murray, they advanced though the Euro-African play-offs, beating Portugal, Holland, Israel and Austria, for a chance to claim a place in the second tier of the competition, World Group II.

The team lost out to Sweden in April, but the experience and the team spirit engendered along the way lifted the performances and aspirations of the quartet.

In particular, Heather Watson—who showed the extent of her potential in taking Maria Sharapova to three tough-fought sets at the US Open last year—has surged up the order in recent weeks to head the British rankings for the first time in her career.

At Wimbledon, she became the first British woman to reach the third round in 10 years. She then crossed the Atlantic to reach the second round in the Stanford singles draw and won the doubles title, making her the first to win a WTA title of any kind since February 1992. In singles, she rose to No71 and this week, a second-round finish in Carlsbad has taken her to 67.

The youngest player of the four, still just 18, is former Wimbledon junior champion Robson. She won that title at 14 and made her debut in the top 100 senior rankings at this year’s Wimbledon.

Robson has since broken more new ground, heading off to the clay of Palermo to reach her first tour semi-final. She is just the second British woman in the last 20 years to reach a WTA semi in singles: The woman separating her and Watson in the British rankings, Keothavong, was the last.

At the cut-off date for nominations for Olympic participation—at the French Open—the older pair of Keothavong and Baltacha were higher ranked than Watson and Robson, and will play in the Olympic singles.

The younger duo will pair up for the doubles, and they got in plenty of practice during the UK grass season, reaching the Nottingham finals and the Eastbourne quarters together. 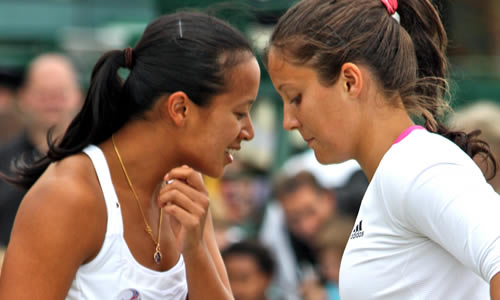 Baltacha was given an International Tennis Federation place in the singles—“I still can’t thank them enough!”—but when the Romanian pair of Irina-Camelia Begu and Monica Niculescu withdrew with injury, she and Keothavong moved into the main draw of the doubles competition, as well.

Baltacha, who will turn 31 just as the Olympics reaches its conclusion next month, has been on the tour for 15 years but it is only since the last Olympics in Beijing in 2008 that she has broken the top-100 barrier, peaking at 49 in late 2010.

This, then, is her first—and possibly her last—time to fulfil an Olympic dream: “It means the world to me to be able to become an Olympian: It really is a dream come true.

“My dad Sergei won a bronze medal in the 1980 Moscow Olympics for soccer, playing for the Soviet Union, while my mum missed out on a place as a pentathlete because she had to stay home and look after my brother. I feel like the Olympics is in my blood.”

But if qualifying for the squad was emotional, so was her moment with the Olympic torch this week. Baltacha is the only female tennis player to carry the flame so far, and it proved to be almost overwhelming.

In her column for the BBC, she explained: “I thought I’d be fine but the second the flame took on my torch I couldn’t hold back the tears and I had to keep wiping my eyes as I was running along.

“Anne and I have enjoyed some incredible moments together through our careers, especially playing Fed Cup, and we really enjoyed playing doubles together at Wimbledon a couple of weeks ago. It’s going to be a real pleasure for us to go out there and compete hard as part of Team GB.

“I’m sure the excitement amongst all of us playing for Team GB will just build and build from here, but for now I’m going to cherish today and what it felt like to carry the Olympic torch in my hand—and try not to cry again!”

Keothavong added: “Having the Olympics here in London is going to be a once in a lifetime experience and competing in a home Games will definitely be a highlight of my career.

“It’s amazing to see how much the area has changed. It’s great for this part of London, where I grew up, and the whole city itself to be hosting these Games.”

Andy Murray will, of course, remain the brightest hope for a British tennis medal in London—he may even manage two! But the team spirit of the British Fed Cup squad which has seen each one of the four compete both with and against one another to reach ever-better targets, could see them cause just one or two upsets of their own.

The Olympic tennis competition begins this Saturday, the day after the Opening Ceremony, and mixed doubles pairings will be announced once the tournament is under way.