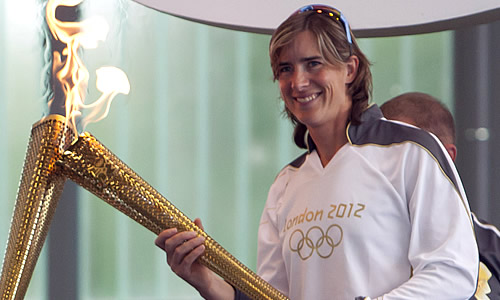 Olympic gold medallists Katherine Grainger and Anna Watkins will start this weekend’s Virgin Money London marathon – and then run the race themselves.

Grainger and Watkins, who won rowing’s double sculls gold at london 2012, will send 36,000 runners and wheelchair racers on their way this Sunday.

And Olympic diving bronze medallist Tom Daley will be the starter for the mini marathon for athletes aged between 11 and 17.

Grainger is running the race for International Inspiration, a charity set up after London 2012 to use sport to tackle social problems.

And Watkins, who recently announced she would not be competing at the 2016 Olympics, after taking a year out following the birth of her first child William, will be competing as part of a squad of runners raising funds for Macmillan Cancer Support.

“Having the opportunity to take part in the race on behalf of International Inspiration is a privilege in itself, but having been asked to start the race on its behalf is an honour,” said four-time Olympic medallist Grainger.

“I can’t wait to feel the energy of a ‘home crowd’ again as I take part in one of the most iconic marathons in the world.”

Double Olympic champion Mo Farah is making his debut over the 26.2 mile distance while four-time London Paralympic champion David Weir is looking for a record seventh victory in the men’s wheelchair race.