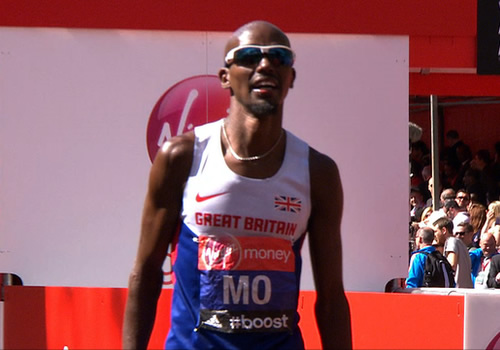 Great Britain’s Mo Farah insists he will be back to tackle the marathon again after finishing eighth in London, just missing out on a British record in the process.

Farah, a double Olympic champion on the track, came home 68 seconds short of Steve Jones’ 29-year-old British record in a time of 2:08.21.

Kenya’s Wilson Kipsang, the world record holder over the 26.2-mile marathon distance, was the winner of the men’s elite race in a time of 2:04.27, with compatriot Stanley Biwott second.

Farah elected to run with the second pack of elite runners and at the halfway point was 38 seconds behind the lead group, but by the 19-mile point that had increased to just over a minute.

The 31-year-old did set a new English record on what was his marathon debut and admitted afterwards that while it was tough going, he will definitely be giving it another go.

“I will be back,” said Farah. “I’m not going to finish it like this. I gave it my all but I’m disappointed I didn’t go out there and give what the crowd deserve.

“It was pretty tough. I’m disappointed but you try things and sometimes it doesn’t work – you have to give it a go. You learn – life goes on.”

There was other British interest in the form of Chris Thompson – who came home in 11th place – and London 2012 Olympian Scott Overall, who finished 17th.