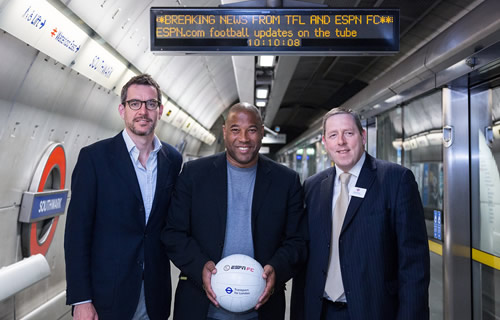 Commuters in London no longer need to fear missing out the latest news from the World Cup during rush our this summer.

Transport for London have announced plans to display news, results and score updates from Brazil via overhead platform indicators at over 140 Underground stations.

The service, in partnership with ESPN FC, will begin on Thursday 12 June with live updates from the Brazil and Croatia game in Sao Paolo, and will continue until Monday 14 July.

With games in Brazil kicking off in the afternoon and evening, TfL are promising to keep fans up to date during rush hour and on their way home from a night out.

“This is a great way to keep fans up to date during the big games,” said ESPN FC ambassador John Barnes.

“There will be plenty of people who have to travel while matches are being played, or may have missed the results from matches the night before

The updates will be displayed at stations including the entire Central line, Northern line, Bakerloo line and Jubilee line.

Managing director of London Underground and Rail Mike Brown added: “This is a great way to keep our passengers up to date on the football and we are really pleased to be teaming up with ESPNFC to deliver this.

“It also generates a bit of money to allow us to keep investing in further improvements to the tube network.”