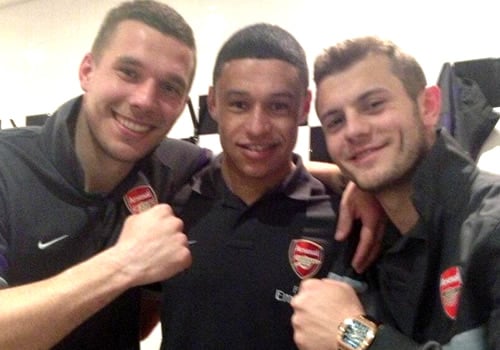 Per Mertesacker headed home the winner for Arsenal in a closely-contested London derby against Fulham at Craven Cottage.

Here is the best of the Twitter reaction from the professionals, past and present, in chronological order to what could prove to be a decisive Saturday in the top flight.

Former Liverpool midfielder Dietmar Hamann ‏(@DietmarHamann) is not impressed by Steve Sidwell’s attempt at a challenge on Mikel Arteta as he is shown a 12-minute red card at Craven Cottage: “Sidwell got sent off in the last two games he has played for poor challenges and both times he pretended he got hurt. EMBARRASSING!”

England legend Gary Lineker ‏(@GaryLineker) is worried for Saturday night’s Match of the Day: “For crying out loud, give us a few goals! #MOTD”

Southampton full-back Luke Shaw (‏@Luke_shaw33) is happy with a point at Swansea: “A good point away from home , lads stuck with each other in a very hard game #welldoneboys”

Sunderland defender Titus Bramble (@19tmb) is delighted to secure back-to-back victories: “Two wins from two at this time of the season is absolutely massive.
Buzzing for the lads and big thanks to the fans for their great support.”

Stoke defender Robert Huth ‏(@robert_huth) is euphoric after a rare win: “Get in! Massive three points, no red card. It’s like Christmas!”

Potters striker Michael Owen (‏@themichaelowen) jokes that there was never any worry of losing that game: “Never in doubt!!! #phew #stoke”

And Arsenal striker Lukas Podolski (‏@Podolski10), who was a second-half substitute at Fulham, is glad to win the London derby: “Great victory won the #derby and three points. Here with @JackWilshere #Bro and @Alex_OxChambo!”

Swansea 0 Southampton 0: We need one more win to be safe – Pochettino