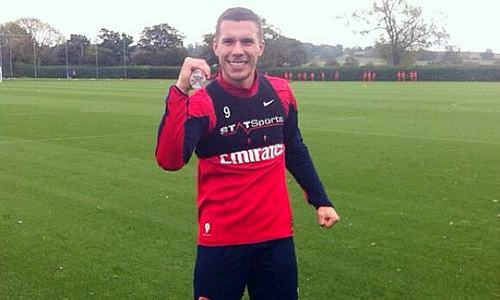 Lukas Podolski has warned that missing out on a top-four finish this season would be a “disaster” for Arsenal.

The Gunners dropped down to fifth in the Premier League table on Saturday as Everton’s win at Sunderland moved them two points above the north London side with five games to go.

When you don’t play in the Champions League, it’s a disaster

Arsenal have the chance to end their nine-year wait for a major trophy after beating Wigan on penalties to set up an FA Cup final clash against Hull City.

However, forward Podolski admits that Arsene Wenger’s side will need focus on their top-flight form as they look to break back into the top four.

“Every season is a pressure when you don’t win anything and the newspapers speak about it, the fans gets nervous but we have the chance this year to win the FA Cup so maybe it helps the club, us and the boss,” Podolski is quoted as saying by the Daily Mirror.

“But the other important thing is to get fourth place back because when you don’t play in the Champions League, it’s a disaster.”