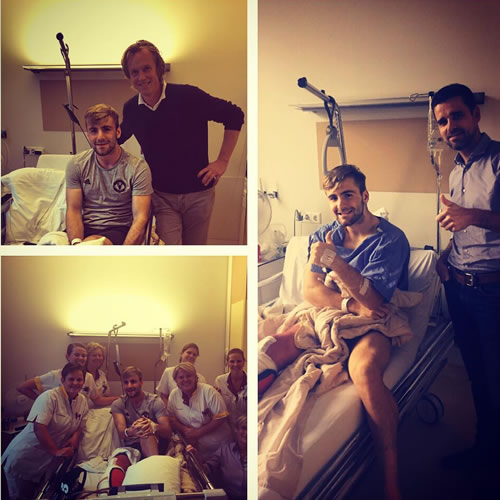 Louis van Gaal has revealed that Luke Shaw is progressing well in his recovery from his broken leg.

The left-back has not featured for Manchester United since sustaining the horrific injury during the Champions League clash at PSV Eindhoven on 15 September.

And the Manchester United manager revealed on Friday that the England international has been been making steady progress in his recovery.

However, Van Gaal refused to set a date for Shaw’s proposed return to action for the Red Devils.

Van Gaal told MUTV on Friday: “Shaw was with his surgeon and everything is going well. His bone is growing and that is very positive, but he needs time.”

Asked if he could possibly return ahead of schedule, he added: “Yes, but when I say that then everybody thinks he is coming back within three months but it is not like that, you cannot say that.

“At this moment he is ahead in his rehabilitation but there are also weeks when he is slow. At the end, it is mostly the same [length of] time.”

Shaw will no doubt be keeping a close eye on proceedings as Van Gaal and his Manchester United side are preparing for their Premier League clash with Liverpool at Anfield on Sunday afternoon.

The Red Devils are currently sixth in the table and two points behind fourth-placed Tottenham Hotspur.