Madrid Masters 2013 preview: The ATP Tour's finest are in action in Spain this week, where Roger Federer is the defending champion 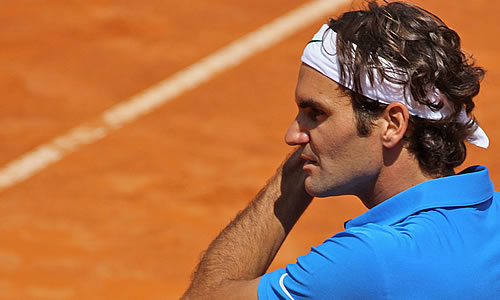 While the history of the tennis fiesta that opens in Madrid this weekend may be short, it has certainly been packed with incident.

The Mutua Madrid Open united the men’s Masters and women’s Premier event for the first time in 2009—and for the men that meant a dramatic switch from the indoor hard courts of autumn to the sultry clay of May.

From the first, the event made headlines: The architecturally-innovative Caja Magica was not universally admired. For all the modernity of its sleek metal, and show-courts attracted early criticism for being hard, uneven and ill-prepared. The metal surrounding walls made them noisy and produced difficult shadows. And then there were unpopular experiments with a blue clay designed to match the blue-themed venue.

Perhaps the players expected those trials to remain experimental, but they did not, and many were less than enthused by the break with the terracotta tradition. They were even less pleased when they played on it, claiming that the hardcore foundation was not adequately dressed with grit—and vital component in the slipping and sliding tennis of clay.

And while Madrid, a city built on the highMadrid Masters 2013: Spanish plateau, has always made the pace of things a little different from the regular clay at sea-level—scattering names like Roger Federer, Serena Williams and Petra Kvitova among the traditional clay champions—this was just too different for many to handle.

Rafael Nadal made a shock third-round exit—his first loss in 14 matches to compatriot Fernando Verdasco—and Novak Djokovic suffered a rare loss to his compatriot, Janko Tipsarevic, in the quarters.

The top two seeds were subsequently little short of condemnatory. From Nadal: “The movements are very important for me and here I cannot move so I cannot hit the ball the way that I want…I tried my best to prepare but I wasn’t good enough to adapt my game to this court. The only thing that I know is that if things continue like this I am very sad but next year will be one less tournament in my calendar.”

Djokovic opined: “To me that’s not tennis. Either I come out with football shoes or I invite Chuck Norris to advise me how to play on this court…When you slide on the red clay you have a feeling you can stop and recover from that step. But here, whatever you do, you are always slipping.”

It was left to Federer to master the surface with his trademark nimble footwork and fondness for fast courts, taking his second Madrid title on clay.

But this year, the blue is gone, the terracotta reinstated, and Nadal and Djokovic are back. There are other things rather different this time around, too.

Last year, Federer came to Madrid on a surge of form, already with three titles in the bag. He went on to win Wimbledon, take silver in the Olympics and then triumph in Cincinnati. But he has not won a title since, a stretch of almost nine months. Along the way he failed to defend his Basel, Paris and World Tour Finals titles. This year, he has also failed to defend Rotterdam, Dubai and Indian Wells.

He, perhaps more than anyone in the draw, will want to stop the drought, especially after taking a much-publicised two-month break to work on fitness and prepare for clay.

Nadal dominated the red clay last year from Monte Carlo to Paris, so Madrid is the only place this year that he can make points before the switch to grass. And ranked at a lowly five after half a season missed with injury, points are valuable.

Points for Djokovic are less important: He stands thousands ahead of the field. But with Nadal back on the clay stage, the Serb’s win over him in Monte Carlo was a key step in reasserting the dominance he had over Nadal in 2011—for he wants the big prize at Roland Garros to complete a career Grand Slam.

For world No3 Andy Murray, a good performance after missing Madrid with injury last year is important both for ranking and confidence. He is just 100 points behind Federer, so even if the Swiss defends his title, Murray is poised to overtake him with just a quarter-final finish. And if Federer fails to win, Murray will overtake him anyway.

So the questions pile up even before they test the red stuff. First and foremost, will Federer emerge from his Swiss training ground with his 2012 form and win his first title of 2013? And second, whose quarter will a No5 Nadal disrupt?

NB No 7 Juan Martin del Potro pulled out ahead of the draw with a virus, and No21 Philippe Kohlschreiber withdrew for personal reasons.

As luck would have it, and like so many draws before, one of the “big four” has fallen into each quarter: Good for Djokovic, Federer, Murray and Nadal, but a metaphorical kick in the teeth for David Ferrer.

For everyone else—the tournament organisers, sponsors and fans—the draw is close to perfect in replaying two of the most compelling rivalries of recent years. The bottom half—assuming the worst for Ferrer—pitches Nadal against Federer. The top half brings together Murray and Djokovic.

For while the Serb has beaten Murray 11 out of 18 times, they have split the big ones since the start of last year: Djokovic won both Australian Opens while Murray came out on top at the Olympics and the US Open. And the last time they met on clay, in Rome 2011, it was the match of the tournament.

Murray has what looks the easier path to the semis: His highest seed before the quarters is Gilles Simon, who has beaten Murray only once in 11 meetings, and that was their first six years ago. Before then, Murray could meet Thomaz Bellucci, who won their only previous match—in Madrid two years ago. By coincidence, the Brazilian also beat his first opponent, Florian Mayer, in the same tournament—and then beat Tomas Berdych in one of his best Masters performances.

Murray should meet Berdych in the quarters, unless the big Czech is bamboozled by clay expert Juan Monaco, who has a decent chance of beating Tipsarevic in a good-looking first-round match.

Djokovic could be one half of a stand-out second-round match against the constantly improving Grigor Dimitrov. The young Bulgarian gave the top seed a run for his money in the first set in Indian Wells and, more significant, had a good run on Monte Carlo’s clay, taking the first set from Nadal in the quarters.

Indeed Djokovic has more big names to dispose of before Murray, including Stan Wawrinka in the third round. The second Swiss has been playing strong, winning tennis on clay this season, reaching the final of Buenos Aires, semis in Casablanca and beating Murray in Monte Carlo.

In the other section of this quarter is Jo-Wilfried Tsonga, also with some form this season but not entirely at home on clay—unlike the Djokovic who beat Nadal for the Monte Carlo title.

Ferrer may still be on course to take the No4 ranking to Roland Garros, especially as Nadal has to defend the title next week in Rome, but he will surely curse his luck in drawing Nadal in the quarters, and so cutting down his chance of a semi finish on home soil.

Nadal has, until the start of this year, always overshadowed his older compatriot both in the rankings and on the tennis court. Only last month, he crushed him, 6-0, 6-2 in Acapulco, while in last year’s French Open semis, Rome semis and Barcelona final, Ferrer did not win a set. It has been ever thus.

Were that not enough for a Ferrer who has not been in prime shape since his brutal Miami final against Murray, he could face the returning, in-form Tommy Robredo or the even more in-form Tommy Haas in the third round. The lucky winner will get Nadal.

The flairy Benoit Paire faces Nadal first, then probably Nicolas Almagro, who has great stats this year on clay but has lost all 10 previous matches to his compatriot—including twice this year.

In the bottom quarter, Federer will hope for a couple of straight-forward encounters to ease himself into match-form: He has not played since losing to Nadal in the quarters of Indian Wells.

Past records suggest he should have no problem with Bernard Tomic or Radek Stepanek, but he may want to avoid Jurgen Melzer in the third round. The Austrian beat him in straight sets the last time they met—on clay in Monte Carlo in 2011. Alternatives to Melzer are Marcel Granollers, Viktor Troicki and Kei Nishikori—none of them walkovers.

The quarters could pose another man who has got the better of Federer on clay, Richard Gasquet, promoted to No 8 seed by del Potro’s absence. He beat the Swiss in Rome in 2011. On the hard clay here last year, Federer got revenge but the return to a slower red may spell trouble: The Frenchman is having a resurgent season.

Gasquet first has to get through some good competition such as Marin Cilic, John Isner and Feliciano Lopez, to earn his tilt at Federer.

MORE: Serena Williams and Maria Sharapova vie for No1 in Madrid