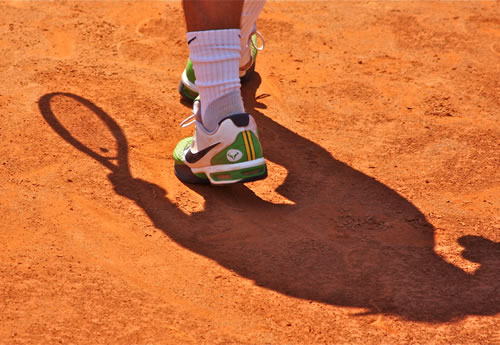 This is a tournament of strong contrasts, of cool grey metal married with hot orange dust, of modern line and angle overlooking the crescent shaped patterns made in clay by curved soles and balls.

La Caja Magica in Madrid is a wonder of engineering that nevertheless creates deep interlocking shadows and eye-watering brightness. The show courts not only resonate with echoes like no other venue but also dissect the court surface into deeply contrasting segments of light and dark.

The unique challenge of such conditions was faced in two intriguing matches that opened play on the Arantxa Sanchez Vicario arena. The second of them, between the resurgent over-30s, Tommy Haas and Tommy Robredo, brought together styles as contrasting as the deep shadow that filled two sides of the brilliant terracotta rectangle.

Both might have glorious single-handed backhands, both might be former top-five players, both may have surged up the rankings after languishing outside the top 100 with injury, but Robredo is all clay-court guile, as much about defence as attack, while Haas is an all-court shot-making eager to step into the attack.

Theirs made for an entertaining encounter that turned stereotyping on its head: the Spanish Robredo exuded a focused calm, while the German’s emotions swung to and fro with the games.

But despite this being clay and Spain, these atypical faster conditions suited the bigger, stronger, attacking Haas, and he sealed the first set, 6-3. He played his tennis in full sun, on and inside the baseline, attacking the net 25 times in their intense two sets. Robredo, in contrast, almost disappeared from view, so deep did he stand in the shadows to receive serve and counter the German attack with wonderfully crafted ground-strokes.

He certainly had his chances, breaking Haas in the fourth game of the second set and leading at 5-2 as the German lost his cool entirely over a clutch of close line calls.

But just in time, Haas switched into ‘cool’ mode, survived break points at 3-5 and then broke with some clinical attacking tennis. He did not lose another game, serving out for a 7-5 victory.

The first match on Madrid’s second court featured a young man ready and able to emerge, both literally and metaphorically, from the shadows.

Jerzy Janowicz has been one of the new generation of players who promised much and, in the last 12 months, has proved their worth. The hugely athletic 6ft 8in 22-year-old now stands at 24 in the rankings, but although his big game took him to his first Masters final in Paris at the end of 2012, the clay had proved less accommodating. That was until he took on another tall powerhouse in the shape of Tomas Berdych—a persistent presence in the top 10 for three years and at a career-high No6.

A finalist in Madrid last year, Berdycg was aiming to emulate Andy Murray and win his 400th match against this emerging force from Poland. However after the youngest man of the new top-50 wave, Grigor Dimitrov, entered the spotlight by beating the top seed Novak Djokovic just the night before, all eyes turned to Janowicz to do the same—and he almost pulled it off.

He took the first set in a tie-break, only to concede the next two sets, 6-3, 6-2, in a display not unlike a much younger Berdych. What Janowicz lacked was the calm consistency and self-belief that the Czech man has now built around himself like a wall, but he did match Berdych in aces—10—and indeed he won one point more, 97 to 96.

The result pushed Berdych across the 400 mark but also proved that Janowicz, like Dimitrov, is ready to step from the shadows into the sunlight of the top 20 very soon.

And so to perhaps the brightest-shining man of all when it comes to Spain and clay. Rafael Nadal has been on a tear since returning from injury in February and leads the tour in titles won, four of them, from a run of six finals in six tournaments.

Among the run of trophies has been an eighth title in Barcelona, and he now entered his 11th Madrid Masters—remarkable at only 26 years old—with a tournament record of 25-8, including the title in 2005, when held indoors, and in 2010.

Nadal faced another young man touted as a rising star, though in fact he celebrated his 24th birthday as he stepped into Madrid’s lion’s den. Their first meeting had been, as if to rub salt into the Frenchman’s wounds, just a fortnight before in Barcelona. It was a defeat for Paire, though he did take the champion to a first-set tie-break.

He was less successful this time, despite deploying some superb drop shots and his signature off-backhand to some effect. Nadal rose to each challenge posed, out-serving his opponent at almost 80 per cent and breaking twice for a convincing hour-and-a-half, 6-3, 6-4 win.

Nadal now stands at a 27-2 win rate for the year and seems to be improving with every tournament he plays, but that is just as well. He still faces the considerable fire-power of either Nicolas Almagro or Mikhail Youzhny, and then either Haas or the winner between Denis Istomin and No4 seed and compatriot, David Ferrer.

Haas has never won a set from Nadal, despite all their previous matches being on hard courts. Almagro is in the same boat: 10 matches, 10 losses, the latest in the Barcelona final. Youzhny has fared a little better, but not in over five years and never on clay.

As for Ferrer, his victories over Nadal, in matches and in the rankings, have been rare indeed. He defeated an injured Nadal at the Australian Open in 2011, and this season sits one place above him for the first time in his career. One suspects, though, that he will not enjoy his brief emergence from Nadal’s shadow for very much longer.