Day after his 19th birthday, the dazzling teenager reaches semis to face No1 Djokovic for first time 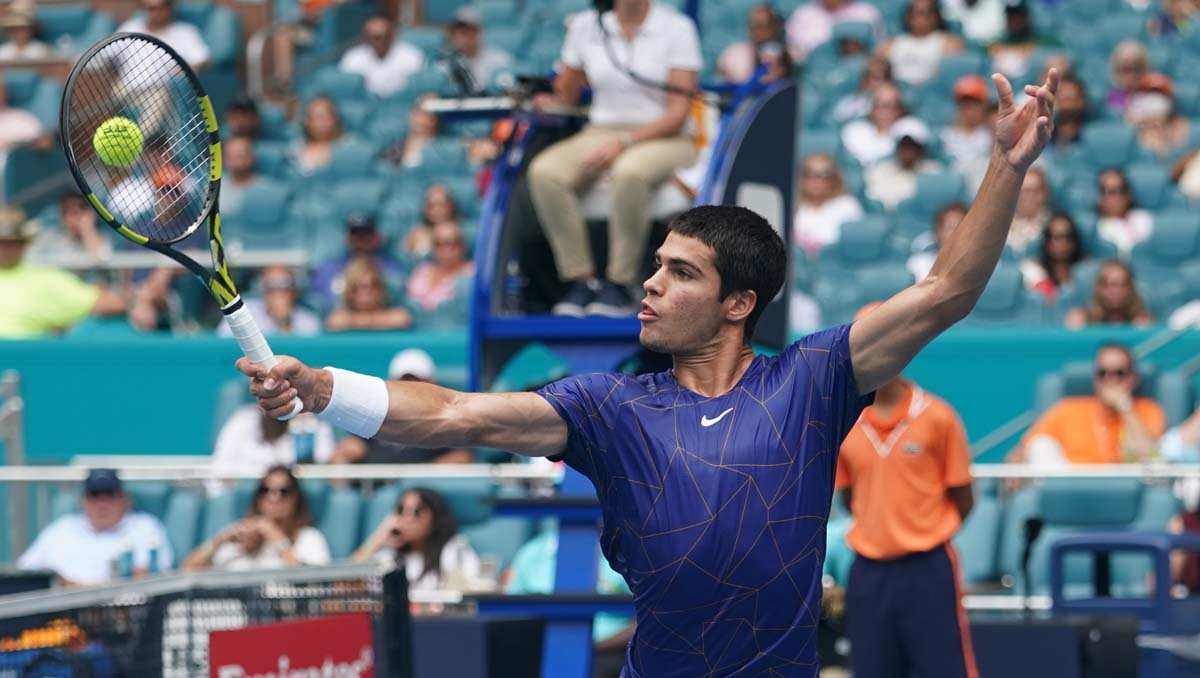 This promised to be a cracker of a day at the Mutua Madrid Open. For the first time in the tournament’s history, seven of the top-eight seeds were in contention, with just Casper Ruud losing his scheduled spot to world No14 and 12th seed, Hubert Hurkacz.

Among those seven were the three men who had won nine of the last 11 titles in Madrid: world No1 Novak Djokovic, world No3 Alexander Zverev, and world No4 Rafael Nadal. Three more in the line-up had won a Masters elsewhere, while a seventh, Andrey Rublev, had reached two Masters finals.

This was a quality field, and no mistake, and one of the stand-out questions was whether the two ‘veterans’, 34-year-old Djokovic and 35-year-old Nadal, could take on the rest, all of them a decade their junior. Would one of the record-holding Masters and Majors champions deny the young chasing pack?

One thing was clear: If Djokovic and Nadal beat Hurkacz and Carlos Alcaraz respectively, they would extend the most played rivalry in the Open era. A semi-final meeting would be their 59th match, a full 14 years after their first. When that first match was played, in 2006, Nadal’s young Spanish opponent was just three years old.

Alcaraz, who was fast becoming the biggest name among the young generation, celebrated his 18th birthday on this very court a year ago, against the very same opponent. Nadal conceded just three games to the teenager, but since then, the fresh, athletic, exuberant tennis of Alcaraz had taken him from 120 in the ranks to No9 this week. Remarkably, he was already a Masters champion, in Miami, and had won two clay 500s this season too, in Rio and Barcelona.

Nadal did edge Alcaraz in a marathon three-setter in the Indian Wells semis, having won a record 21st Major in Australia, but Alcaraz had accumulated more wins this season, 25 to Nadal’s 22. Now the two of them would set a new Masters record for the biggest age-gap in a Masters quarter-final—with Alcaraz the youngest ever Madrid quarter-finalist.

First it was Djokovic who attempted to reach the semis. Hurkacz, fortunately for his energy levels, had beaten Dusan Lajovic in straight sets, but his previous two matches had each taken three sets and almost three hours. He had also played three matches to Djokovic’s one, yet this would be his first on the main Manolo Santana court.

Add into the equation that Djokovic had won in Madrid three times before and was chasing his 30th match-win at the Caja Magica—and had beaten Hurkacz in all three previous matches—and the Pole had an uphill task in the heat of the Spanish afternoon.

Djokovic opened serving, and although his first delivery was not at its best, he held to love, broke an error-strewn Hurkacz, and held with ease again for 3-0.

The Pole’s serve is one of his biggest strengths, and he finally got on the board in the fourth game, but he never worked a break chance in the set against the top seed as Djokovic’s serve started to find its mark. The top seed went on to serve out the set in a little over half an hour, 6-3.

The second set began just as poorly for the Pole, who looked tight, nervous and lacking confidence on his serve. He began with a double fault, thumped a forehand wide, and faced an immediate break point. But he now injected some attack, and held on to earn plenty of cheers from the crowd.

But the resistance was short-lived: Hurkacz was making too many errors, Djokovic playing with too much depth, and serving too well. A break in the fifth game was enough, and Djokovic held for 4-2—and very nearly broke again, finally serving it out, 6-4, in just 80 minutes.

It will be Djokovic’s 72nd Masters semi-final. Only Nadal has reached more, 76, but could the Spaniard make it 77 and ensure another notch in that rivalry?

The atmosphere was electric as Spain’s favourite son arrived on court with the young player who will surely, in due course, take over that role in the home nation’s affections.

With every match Alcaraz has played this year, he has had storming support, and he burst from the gates again with some explosive shot-making to break in the very first game.

Thus far, no teenager had every beaten Nadal on a clay court—a clean 20-0 record. Would Alcaraz be the first? He faced three immediate break-back points, but produced three huge serves to save them. However, Nadal moved like quicksilver to work another chance, and Alcaraz double faulted: 1-1.

Then a nine-minute game had the two men fully engaged from the baseline, but Alcaraz took more risks at the net, and to great effect. He broke again, 2-1, with the match already 22 minutes old, and he threatened again in the fifth game.

Nadal had to find some extraordinary strikes and accuracy to hold, but could not do so the next time, as Alcaraz threw in drop-shots, fired stunning angles, and completed the break with a forehand winner, 5-2. He served it out to love, 6-2, after three-quarters of an hour.

The fans seemed unsure how to react: They cheered the teenager’s shot-making, but clearly found it hard to see their long-standing hero unable to defuse Alcaraz’s game.

Nadal had to fight long and hard to hold his opening game in the second set, and so did Alcaraz. The teenager faced 0-40, saving two of those points with drop-shot winners. Seventeen minutes down, 1-1, but then Alcaraz took an ankle-twisting tumble and was forced to strap it up ahead of serving to stay on level terms.

Sure enough, with his movement impaired, he was broken to love, 1-3. Indeed Nadal went on to win 20 of the last 21 points in the set, 6-1, and Alcaraz left the court to get further treatment. Without his full mobility, was it even viable to continue now that Nadal had the bit between his teeth?

It was, with Alcaraz starting to play as he had in the first set, and Nadal was slow to respond. The teenager broke to love in the fourth game, 3-1, but had to hold onto that advantage after Nadal held to love with his signature scowl in place.

The teenager served for the match at 5-3, opening with a bold serve and drop-shot winner. A near-duplicate brought up match point, and an extraordinary forehand winner finished the job, 6-3, to score a land-mark first win for the young Spaniard over his idol.

The roar from the crowd was deafening, as was the cheer for Nadal as he waved farewell. The Madrid fans knew they had seen something special, but only in the morning will the young star and his team know whether his ankle has survived the fall. If it has, expect fireworks against the world No1 in their first ever contest.

In the bottom half, two more hugely appetising matches were reserved for the night session, with Monte-Carlo champion Stefanos Tsitsipas taking on Belgrade winner, Andrey Rublev. The Russian had come through tougher wins this week, but they had shared their previous eight matches.

Whoever survived would face either second seed and defending champion Alexander Zverev or No8 Felix Auger-Aliassime, in a late-night contest that was unlikely to begin on the right side of 10pm, with the winner playing his semi-final at 9pm Saturday night.

Auger-Aliassime had shown stunning form in the tournament thus far: just three games dropped in each of his two matches. Zverev had the advantage in previous matches, but their last three meetings had all gone the distance.