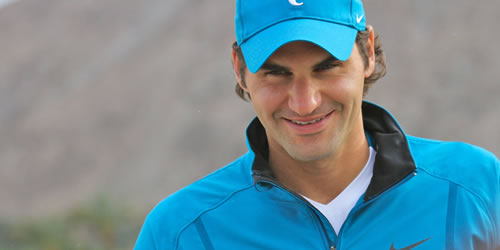 Roger Federer leapfrogged Rafael Nadal to world No2 with his victory in Madrid Photo: Marianne Bevis

It was a day to be born under a different star sign. The domain of Gemini may be a week away, but on this Sunday in the middle of May, tennis aficionados really did need a twin to share the load.

For just as the Rome Masters plunged headlong into the men’s draw on one side of the Mediterranean, its younger, bluer and more controversial sibling in Madrid was working towards its climax. Yes, Gemini fitted the bill perfectly.

Come 4.30 pm on both sides of the Med, however, all eyes turned to one match and to the campaign of one of its protagonists in particular.

Roger Federer, in taking on Tomas Berdych in the Spanish capital, knew there was more simply than €500,000 in prize money at stake. He had, in any case, already passed a cool $70m in prize money by winning the semi-final.

He was bidding for his third Madrid title and a tour-leading fourth title this year, and he could again draw level with Rafael Nadal’s record 20 Masters titles.

But with last year’s two finalists, Nadal and Novak Djokovic, making earlier than expected exists this year, Federer also had the chance to regain the No2 ranking for the first time in more than a year.

He predicted a rough ride to those targets, though: “I expect quick points and big shots from both sides. I think that we match up pretty well against each other because of the shot making.”

It looked even before they began as though Federer, too, had succumbed to the Gemini effect for what else but a doppelganger could explain his winning the coin toss but electing for the court end rather than to serve—against one of the biggest servers around. It proved to be a serious misjudgement.

Berdych not only held his opening serve but then took hold of Federer’s deliveries as though they were mere flotsam in this sea of a court. The Czech fired three blistering return-of-serve winners and, helped by a Federer drop-shot into the net, he broke.

Not until the fourth game did Federer disturb the scoreboard, but the Berdych barrage opened up a 5-2 lead.

Federer looked destined to lose the set in under half an hour at 15-40 down and, although he survived, it was not for long. Berdych bristled with energy, withstood all that the Swiss racket could fire at him, even at the net, and took the set, 6-3.

With just two unforced errors to Federer’s nine, the Czech had made a powerful opening statement.

Federer got off to a shaky start to the second set, too, but survived first a volley and then a drop shot into the net. It was then Berdych’s turn to misfire and he hit two forehands long to bring up an unexpected break point in the second game. Federer needed no encouragement: He skipped backwards into the ad court and struck a winning off-forehand.

He briefly lost concentration in the fifth game to give up a 40-0 lead and then face break point, but he held with a big serve and volley—a rare tactic compared with his first match against Milos Raonic.

Berdych, too, volleyed his way out of a break point to keep himself in touch at just a single—and a rather tentative looking—break down. His resilience quickly paid off.

Serving for the set at 5-3, Federer made the second of only two double faults in the match, and a stunning passing shot by Berdych brought up deuce. The Czech man continued to pile on the pressure from the baseline and broke. A solid hold of serve and they were all square in the most dramatic fashion: 5-5.

But the drama was redoubled two games later. Federer, gazing down the barrel of a tie-break that could determine the title, hit back in electric fashion with a sequence of winners off the Berdych serve. The Czech buckled with a double fault on set point and it was 7-5 to Federer.

The third set began much as the first had done, with Federer looking down that gun barrel again in the opening game. He went down 15-40, and managed to serve himself out of trouble, but he looked increasingly unable to contain the power of Berdych.

The Swiss faced another break point in the third game, and went 30-30 in the fifth—again he served and smashed his way to holds. The match was on a knife-edge: With two hours gone, they stood at precisely 81 points apiece.

Then out of the blue, Federer played his most convincing service game of the match and rushed to a 40-0 lead on the Berdych serve. The Czech saved all three break points with aces, his first of the set, but in one more unexpected reverse, he followed them with two double faults to give Federer the break.

All the Swiss had to do was serve out the match, but still Berdych did not waver. He replied in kind with the kind of forehand that had won him the first set and broke back.

Perhaps Federer was again eyeing a possible tie-break and did not like what he saw. He played a clutch service game and straight away forced three errors from Berdych for three match points. In a moment of dejà-vu, the Czech withstood all three but finally conceded a fatal fourth. Federer ran out the champion, 7-5.

It was not a pretty match, it did not have great flow nor long complex rallies. But it was a match worthy of a Masters final: tense, see-sawing, testing, and full of character from both men.

Little wonder, then, that Berdych had to fight back the tears as he saw his opponent lift that record-equalling 20th Masters trophy.