Madrid Open 2013: Serena Williams says she loves being world No1 ahead of the final against second seed Maria Sharapova 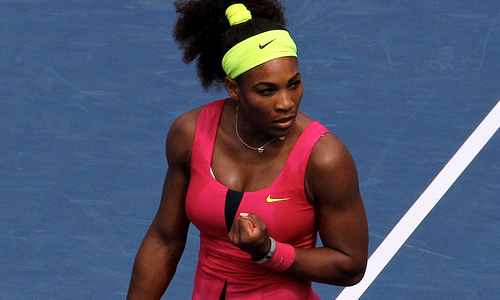 Serena Williams says she loves being world number one ahead of her Madrid Open title showdown with Maria Sharapova on Sunday.

The 31-year-old could relinquish her place at the top of the WTA rankings if she loses to her Russian opponent in the showpiece in the Spanish capital.

Williams became the first woman on the tour to secure 30 wins in 2013 with her semi-final victory on Saturday, and the American insisted she values both her No1 ranking and winning titles in equal measure.

“But I also love to win tournaments. So I think if I just win as many tournaments as I can, I’ll be No1. Hopefully.”

Williams reached the Madrid Open final courtesy of a 7-5 6-2 victory over Italian Sara Errani, who was unable to serve consistently to trouble the 15-time Grand Slam champion.

With her No1 ranking at stake, Williams says she is relishing her battle with Sharapova, who beat Ana Ivanovic to reach Sunday’s showpiece.

“I look forward to it,” she added.

“I feel like this whole tournament I’ve only played clay court players from my first round to now, and everyone was also smaller than me.

“So I think tomorrow will be a really good match – a different game, more power obviously, but still a lot of the consistency. So I’m looking forward to it.”