Roger Federer is the second man in Open era, after Jimmy Connors, to reach 1,200 match-wins 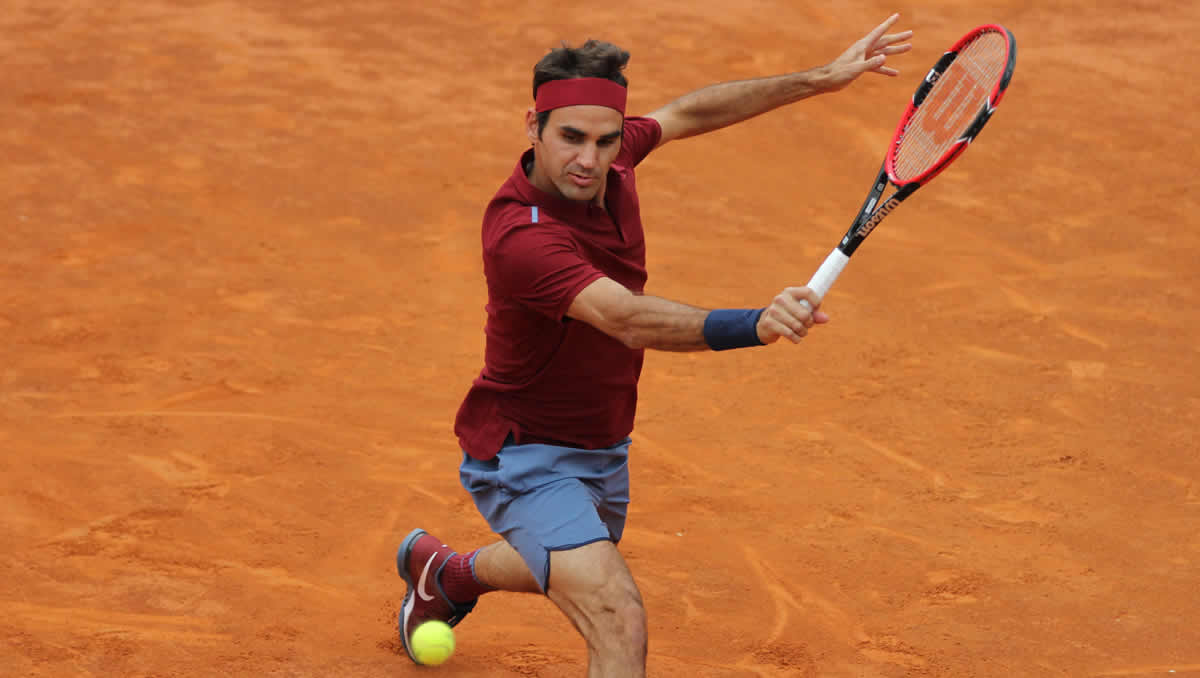 • Federer is second man in Open era, after Jimmy Connors, to reach 1,200 match-wins

• Unseeded Wawrinka back inside top 30 after Nishikori victory

No wonder the queues for Madrid’s charismatic tennis centre, the Magic Box, extended into the distance as fans arrived for Thursday’s action. It is a special day when the three greats of men’s tennis play in consecutive matches on a single court, but here was such an occasion.

It was, in short, a mouth-watering schedule.

A few days after the world No1 Djokovic reached a special milestone in the Spanish capital, his 250th week as the top-ranked man, and a day after Madrid’s most prolific champion, world No2 Nadal, reached his 50th match-win, it was the turn of the third man in the tennis triumvirate to try and tick off another record. Federer could reach 1,200 match-wins, becoming only the second man in the Open era to reach 1,200 after Jimmy Connors.

That he would attempt to do it after three years away from clay and a four-year absence from Madrid added some curiosity. Indeed Federer had not won a match at the Madrid Masters since his single win in 2013—until his opener this year against Richard Gasquet.

That he would face the in-form, charismatic and always dangerous Gael Monfils, who had beaten the Swiss in two of their last three matches—all played on clay—added to the anticipation, though that anticipation looked ill-founded after the first set.

Monfils played a shaky opening game, including a double fault, to concede an immediate break. Now Federer had to serve into the sun, and he too faced break points, but he extracted errors from the Frenchman with his precision to the corners, and held, 2-0.

Federer was into his stride, slicing his backhand, picking off overheads, and defending with great foot-work. A first drop-shot and he had another break, 3-0, then three serve-and-volley plays, 4-0. A quarter of an hour, and it was 5-0, and after 18 minutes, the set was done, 6-0.

A dejected Monfils, with 15 errors in his account compared with three from Federer, ambled to his chair. The Swiss had dropped just nine points, but Monfils was pricked into action—perhaps all the more so by some whistles from the crowd.

An intense opening game by the Frenchman was greeted with an “Allez!” as he served an immediate hold in the second set. He was fired up, going for his shots, powering his forehand, and he drew the errors for a break. Federer was on the back foot, not keeping up with the increase in pace, and went 0-3, with three points to 12.

Federer pressed hard in a long seventh game, worked two break chances and a string of deuces, and the pressure finally told. Monfils made two double faults on the way to a break, and a love hold from Federer consolidated a 4-4 scoreline.

It looked, indeed, as though Federer would close out the win in straight sets, but Monfils saved break point with a big serve-and-volley play, and after seven minutes and several deuces, he held.

Now it was Federer, serving to save the set, who came under pressure, and a forehand error handed it to Monfils, 6-4. The Frenchman then maintained his momentum into the third. He held, and took advantage of a lapse in Federer’s tactics—the Swiss was allowing longer rallies to develop—and broke, 2-0.

Federer thumped a ball out of the court in frustration and got his punishment, a code violation, but what he needed was a break, and that was proving elusive. He failed to convert a break point: 3-0.

Gradually, though, Federer reverted to type, upped the aggression, charged the net at every opportunity even when his first serve missed the mark. But it would be a carved backhand slice down the line that broke the Frenchman, as deft a pass as Federer had played all match. He broke, and roared himself on for the first time in the match.

He repeated that same pass to earn another break chance, but Monfils was proving resilient, his serve and baseline tennis up to the task, and again Federer would have to serve to save the set—and match.

Sure enough, the Swiss found himself staring down a break point—this time, a match-point, and on second serve. But he did not waver—he charged the net, as he would three more times, to hold. It was bold and explosive, and it took them to a tie-break.

Monfils gifted the first point with a double fault, and faced attack after attack at the net from Federer, with two serve and volley winners taking the Swiss to 6-1. Federer had won only nine points at the net in the first two sets together, but he stacked up 22 in the decider alone, and one final big serve brought victory on the dot of two hours—win No 1,200.

He admitted afterwards: “It wasn’t looking good there for a while—some highly stressful moments for me… I really had to force myself to stay aggressive, take on the bad bounces, try to play aggressive and positive tennis.”

It worked, but he will need more of the same in what is an increasingly challenging draw. Federer next faces Dominic Thiem, who beat him in the Indian Wells final and then beat Nadal to win the Barcelona title. The in-form Austrian, one of the favourites for the title, beat Monte-Carlo champion Fabio Fognini 6-4, 7-5.

And the winner will face either Djokovic or Cilic in the semis, for the top seed cruised to his allotted place in the quarters.

Indeed, if there was a match guaranteed to boost the Djokovic confidence, it was against Frenchman Jeremy Chardy. In 12 previous matches, the Serb had not lost a set, and had only twice been taken to a tie-break in 28 sets. And much of that scenario would remain unchanged as Djokovic took less than an hour and a half to reach the quarter-finals.

The first set went by in a flash as the unpredictable tennis of Chardy gave Djokovic plenty of openings on his serve. The former champion went 5-0 before Chardy got on the board, and Djokovic then served it out, 6-1.

The second set was much closer as the Chardy serve found more fire and accuracy, backed ably by his forehand. And few small chances came and went, as Chardy got a break point to win the set, but he thumped a ball long, Djokovic aced, fended off a second deuce, and an ace took it to 5-5.

The Frenchman’s first-strike forehand was keeping him in the match: He was up to a dozen of them as he served to hold, 6-5. However, Djokovic kept the Frenchman’s ambitions at bay with a love hold to reach a tie-break, and once there, the Serb was all precision and focus. He immediately went 3-0, and pumped his fist at the 7-6(2) conclusion. Once again, the two-time Madrid champion conceded not a set to the Frenchman, and was into the quarters to face Cilic.

For the third consecutive match, the No9 seeded Croat took three sets to advance, coming back from a set and 3-1 down against Laslo Djere. And if that was not enough of a weight for Cilic to carry, he faces a 17-2 deficit against Djokovic, including their last three matches and both previous meetings on clay.

Meanwhile, in the bottom half, Stan Wawrinka won a thriller against No6 seed Kei Nishikori, 6-3, 7-6(3), with either Nadal or Frances Tiafoe next. Stefanos Tsitsipas beat Fernando Verdasco, 6-3, 6-4, and will face either Alexander Zverev or Hubert Hurkacz.