Serena Williams loses to Petra Kvitova, while Maria Sharapova is beaten by Svetlana Kuznetsova in the semi-finals of the Madrid Open 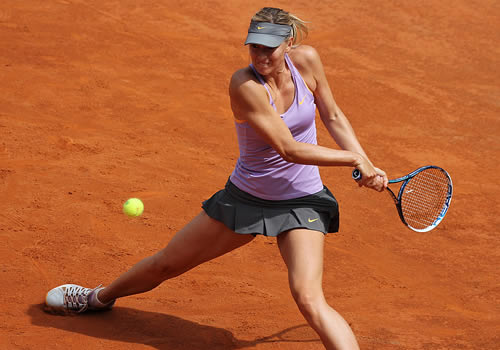 The semi-final line-up at the Caja Majica certainly oozed class.

All three former Madrid champions were present and correct: Maria Sharapova defending her title; two-time titlist Serena Williams; and the 2011 winner Petra Kvitova. And all three were ranked in the top four, with only No2 Simona Halep missing.

All four women were multiple Grand Slam champions: into the mix came Svetlana Kuznetsova who, along with Williams and Sharapova, was also a Roland Garros champion.

All four had been ranked in the top two, Williams and Sharapova each having enjoyed No1, Kvitova and Kuznetsova both former No2s.

But based on past match-ups and present form, there was do doubt that Williams was favoured to score her sixth win in six meetings over Kvitova and that Sharapova was hot favourite to beat the No29-ranked Kuznetsova. The battles between the Russians had gone to Sharapova eight times in 12 meetings.

Both matches proved the pundits wrong, would be won by two women rediscovering truly formidable form.

First up, Kuznetsova continued where she left off in the preceding and very arduous days. She had begun in Madrid against No8 seed Ekaterina Makarova, then beat the hugely talented youngster, No20 Garbine Muguruza, fellow Grand Slam champion Sam Stosur, and the No13 seed Lucie Safarova. She played three straight three-setters, the last two combining to last six hours, but come the renewal of the 10-year Russian rivalry, Kuznetsova raced through, 6-2, 6-4, to reach her first Madrid final.

For Williams, there were more winning streaks on the line than many players compile in an entire career.

By reaching the semi-final, she remained unbeaten this season, stacking up 27 straight wins that dated back to last October. She had won 50 straight Premier Mandatory matches, and 19 in a row in Madrid (she withdrew injured before the quarters last year). And she remained in the midst of a 116-week run at No1—a run that will extend beyond the French Open at least.

The weariness of such constant and enduring excellence showed in this latest match of a tough Madrid draw: After Sloane Stephens, Williams saved match points again Victoria Azarenka and then took out the No10-ranked clay expert, Carla Suarez Navarro.

Kvitova had not played a seed, but had to battle through early three-setters, and that seemed to build her confidence and hone her big-hitting leftie game. And when Kvitova is on song, she is one of the cleanest, finest strikers of the ball in the women’s game: Just ask Eugenie Bouchard, her hapless victim in last year’s Wimbledon final.

And that was the form she brought to bear against Williams, though having broken the world No1 in a long third game, things did not look so promising. Kvitova made three double faults to hand the break straight back. But the Czech was super-calm, and her ball-striking was deep, fast and varied—with the occasional deft sliced drop-shot thrown in for good measure.

Williams was not playing at her highest level: She seemed unable to find enough speed and energy to impose her game and her serve. The errors began to pile up and a backhand hit long gave Kvitova an immediate break. This time, the Czech consolidated with a love hold and broke again.

Now Williams visibly and audibly willed herself to greater effort. Cheered on by the appreciative crowd, she at last converted her fourth break point to close the gap marginally, and held serve. But it was not enough to disrupt the focus of Kvitova, who completed her first victory over Williams with one final break, 6-3.

So Williams’ unbeaten 2015 run comes to an end, and Sharapova’s hopes of reclaiming the No2 ranking goes on hold.

Instead, the two ‘big Ks’ will meet for a fifth time, their first in a final. And what makes it particularly intriguing is that Kuznetsova’s only win was the last, on Roland Garros’s clay last year, 9-7 in the final set.

It could be a cracker.