Marianne Bevis takes a look ahead to the Madrid WTA tournament, where Serena Williams is the defending champion 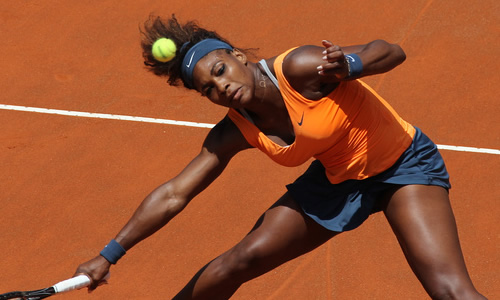 As surely as night follows day, the name of Serena Williams’ is again dominating the headlines ahead of the latest big tournament on the women’s tour. And Madrid really is a big tournament.

The Spanish capital, within its stunning modern venue at La Caja Magica, hosts one of only four Premier Mandatory tournaments in the season. The last woman standing from the impressive 64-name draw and six matches is set to earn a cool 1000 points and almost a €700K prize.

And the name on the trophy for the last two years is Williams’. Last year, she marked a milestone 50th WTA title here, and this year she aims to carve another milestone by winning her 60th.

And yet this time around, there has been just a hint that Williams may not end Madrid as queen bee.

For after a quite astonishing year in 2013 that claimed 11 titles from 13 finals, including the French and US Open crowns and the WTA Championships, and despite holding a current lead of more than 5,000 points at the top of the rankings, she lags behind three other women in the race after a less than dominant start to her season.

Everything is relative, of course. She began 2014 with the defence of her Brisbane title and ended the hard-court swing with the defence of Miami, as well. But a fourth-round exit in Australia, a decision to miss Doha and her unexpected early loss on her return to clay in Charleston—where her jaw-dropping unbeaten clay run took off last year—suggested some lingering fatigue, either mental or physical. She confirmed as much before returning home for a month’s break from competition:

“I need some weeks off where I don’t think about tennis and can kind of regroup. I’m going to go on a vacation, for sure. I just need to take a deep breath and regroup. I think that will actually help me for the rest of the clay court season coming up.”

But she has been practising hard on Madrid’s clay this week and sounding more like her upbeat self:

“I feel like every day you should grow, so there are still things for me to learn in tennis. Just how to be better and how to be consistent.” And winning a third consecutive title in Madrid would certainly prove her point—it’s a feat that even the mighty Serena has only done once before, and that was in Miami.

She is helped in her cause by the absence of one of the few women to get the better of Williams through the last two years. It was Victoria Azarenka who denied the American the titles in those two finals last year, but the world No4 continues to struggle with a foot injury and will miss both Madrid and Rome.

That news also benefits another top player with aspirations in Madrid, Rome and at Roland Garros. Maria Sharapova avoided slipping outside the top 10 last week with an impressive third Stuttgart title, her 30th career title and her 40th win on clay since the start of 2012.

But ranked No9, she was destined to face a higher seed before the quarter-finals. With Azarenka missing, Sharapova is seeded at No8 and, what’s more, she is in the opposite half to Williams—and that is key for the Russian. For while Sharapova has gone 40-3 on clay since the beginning of 2012, all three losses have come in straight sets to Williams.

Williams and Sharapova, though, are not the only ones with the ability and ambition to take titles on clay. The draw contains no fewer than six French Open champions: aside from these two, there are Ana Ivanovic, Svetlana Kuznetsova, Francesca Schiavone and Na Li—and the first three have also been finalists. Add into the mix additional runners-up in Sara Errani and Sam Stosur, along with former Madrid champion Petra Kvitova and Madrid runner-up, Caroline Wozniacki, and this is a strong field of clay players.

And all that takes no account of rising stars who have been elbowing themselves among the elite in the last 12 months. Debutante top-five player Simona Halep is enjoying her own quarter in a big tournament for the first time, and Dominika Cibulkova is new to the top 10 after some storming runs that included the Australian Open final.

Carla Suarez Navarro, representing the home nation, has crept up to No15 and is currently a finalist in Oeiras. Then there is the 20-year-old Eugenie Bouchard, who made a break-through run to the semis in Australia. And while clay is not her proven strength, she beat Jankovic in three sets in the Charleston quarters and took eventual champion Andrea Petkovic to a 7-5 final set in the semis.

In a relatively straightforward quarter, Williams’ first possible seed is the in-form Suarez Navarro, who has just become the WTA’s match-win leader for the year, scoring her 25th in Oeiras.

Next up is either former champion Kvitova or Flavia Pennetta, who made such an outstanding run to the Indian Wells title. She also reached the quarters of Australian Open for the first time to reach No13 in the rankings from 31 at the start of the year. The Italian has a tough opener against Lucie Safarova, who beat Pennetta in their only previous clay meeting—in Rome.

Williams has beaten No5 seed Kvitova in all five of their previous matches, though they have never met on clay.

Riding higher than ever before, the 22-year-old No4 seed Halep reached her first Grand Slam quarter-final in Australia, but her surge last year began on clay: the semis in Rome, then the title in Nurnberg and Budapest—along with wins on grass and hard courts.

She’s in a challenging quarter, though, with Sabine Lisicki her first seed and her possible quarter-final against Ivanovic or Jankovic. Halep does lead Jankovic in their head-to-head, 3-1, though all four meetings have gone to three sets, but the Serb is a three-time French Open semi-finalist and reached the final in Bogota last month.

However, the standout contest may come before the quarters if Jankovic meets her fellow Serb in the third round.

Ivanovic burst onto the clay scene with the French Open title six years ago. She subsequently struggled with fame, expectation and confidence but still aged just 26, she has of late shown signs of that early form.

She reached the quarters in Australia, beating Williams along the way, and ran Sharapova very close in the Stuttgart final. She and Jankovic met in the semis in that 2008 French Open, contesting the No1 ranking at the same time. Ivanovic won, but Jankovic reached No1 the next year and went on to beat Ivanovic in Madrid in 2010. Ivanovic has won all three matches since.

The world No3 has yet to shine on clay, though her best French Open result came last year with a quarter-final run. But the draw has done her no favours at all.

In one of the stand-out contests of the first round, she meets the rising Canadian star Bouchard for the first time, who made a good run in Charleston.

Things don’t get any easier, as the second round brings the winner between former French champion Kuznetsova, who is contesting the Oeiras final this weekend, and Alize Cornet, a former French junior champion and winner on the hard courts of Katowice last month—where she beat Radwanska.

The Pole’s first seed should be Wozniacki, though others here include Daniela Hantuchova and Roberta Vinci. The next seed should be No7 Angelique Kerber, but this segment also contains another former French champion in Schiavone and yet another big first-round contest between No10 Errani and the Charleston champion, Andrea Petkovic.

No2 seed Li heads the race to Singapore with a 21-3 win-loss this season that included the Australian title and a final run in Miami. It is in the other eighth where the big hitters vie to meet her in the quarters: Sharapova and Cibulkova.

Sharapova’s clay credentials should be strong enough to see her through, especially as Cibulkova has Stosur in her opening match. However Cibulkova, almost a foot shorter than the Russian, beat Sharapova from a set down in the fourth round of the Australian Open, their first meeting in almost three years. They have split their six matches, and their four matches on clay.

Sharapova leads Li in their head-to-head, 9-5, but since they met in the French Open in 2009—a see-sawing three-setter—they have shared their 10 matches.

However, if Cibulkova advances to a Li face-off, it would be their fourth meeting this year in one of the most intense match-ups between the two race leaders.