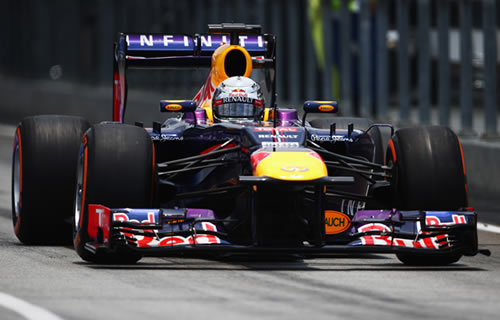 Defending world champion Sebastian Vettel was delighted see his Red Bull seize pole-position for the Malaysian Grand Prix, qualifying almost one second faster than the rest of the grid.

Vettel claimed his 38th career pole, and second in Sepang, after going perilously close to dropping out in Q1 as the German went through in 15th.

The German is joined on the front row by Ferrari’s Felipe Massa with Fernando Alonso third, but admitted he was surprised with the 0.9 seconds difference.

“I was a bit surprised by the gap,” said Vettel. “It was a decent lap and I was very happy because it was tricky with some parts wet and other parts drying out.

“It was generally an interesting qualifying session, we knew that rain was on the way.

“We expected some rain at the beginning of qualifying, but it didn’t come and so we were going out on dries – we had a bit of a different approach to other people.”

Three-time world champion Vettel admitted Red Bull had taken a different approach to other teams, and keeps five fresh sets of slicks, should the rain hold out, for Sunday’s race.

“Q2 was quite on edge, so the rain helped us a little bit otherwise I think we would have had to go out again, but that wasn’t the case,” he added.

“It was just enough to go to Q3 and then in Q3 with the circuit drying it was clear it was better to change tyres and we confirmed that pretty early, so I think we did the right thing.

“Obviously it is very tricky because you don’t know whether there is more rain coming or not, but we took the decision.

“But it was a very good session for us and we managed to save some tyres for tomorrow.”

“Our strategy was to stay out, we thought it would dry out more,” he said. “But I want to be pole, so initially when you get out the car you don’t think you are happy.

“I was hoping to get pole position, but so were the team, but we are a little bit further back than we were hoping for.”

“It’s frustrating when it happens,” said the Scot who saw his Force India lose traction in the rain.

“It’s made life hard for tomorrow, but we’ll come back fighting. I’m confident we’ve got a strong car – I’ll be fighting.”