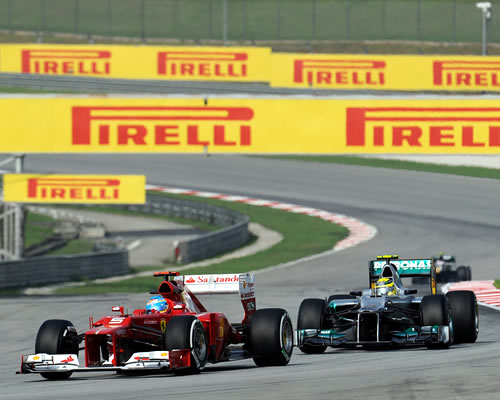 Pirelli’s motorsport director Paul Hembery has described the forthcoming Malaysian Grand Prix as one of the most “extreme” races of the Formula 1 season.

Following Kimi Raikkonen’s triumph at the season-opening Australian Grand Prix in Melbourne, the hardest compound in Pirelli’s 2013 tyre range – the P Zero Orange hard – will make its debut this weekend.

Pirelli says that the two hardest compounds in the 2013 range are “ideal for the extreme temperatures and abrasive surface of Malaysia”.

“We would describe Sepang as genuinely ‘extreme’: both in terms of weather and track surface,” said Hembery.

“This means that it is one of the most demanding weekends for our tyres that we experience all year. For the first time we see our new Orange hard compound in competition, with this colour chosen to make it more easy to distinguish from the white medium on television.

“The nomination we have for Malaysia is the same as last year, but the compounds themselves offer more performance and deliberately increased degradation this season, Last year three stops proved to be the winning strategy in a mixed wet and dry race, with a thrilling finish between Fernando Alonso and Sergio Perez that was all about tyres.

“We’d expect three stops again but once more it’s likely to be weather that dominates the action. Even when it isn’t raining, the drivers can expect humidity in the region of 80 per cent and ambient temperatures of more than 30 degrees centigrade.”

• The P Zero Orange hard tyre has a high working range, whereas the P Zero White medium has a low working range. This makes it an ideal combination that can deal well with any eventuality. The durability characteristics of the new hard tyre are close to those of last year’s medium tyre, resulting in lap times that are around 0.4s-0.5s quicker than the 2012-specification hard.