The Red Devils had the chance to move to within two points of defending Premier League champions Liverpool FC ahead of the Merseyside outfit’s trip to Newcastle United tomorrow.

However, Manchester United struggled to find a way past a resilient Wolves defence at Old Trafford as Ole Gunnar Solskjaer opted to go with Edinson Cavani up front.

Wolves managed to keep Manchester United at bay for 90 minutes before Rashford finally made the breakthrough in added time to clinch three points.

Bruno Fernandes found Rashford with a long ball before the England international’s strike was deflected into the net by Romain Saiss.

Ferdinand wrote on Twitter: “Rasssshyyyyyyyy!!! Get in there @ManUtd ⚽️” 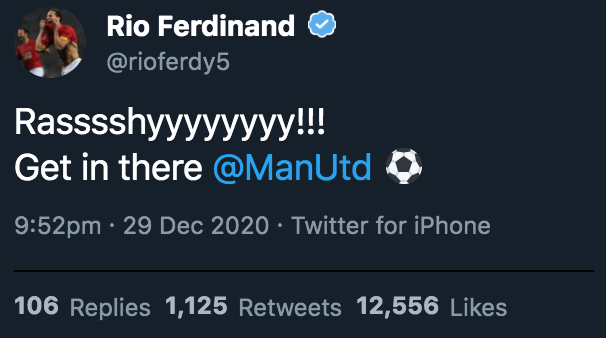 Rashford has scored seven times in the Premier League this season following his late winner in their final league fixture of the calendar year.

Manchester United will host Aston Villa at Old Trafford on New Year’s Day on Friday evening in their first Premier League game of 2021.

The 20-time English champions are two points behind Liverpool FC, although the Reds can move five points clear if the title holders win at Newcastle United.