Gary Lineker took to social media to praise Bruno Fernandes for scoring a “stunning” goal as the Portuguese playmaker helped Manchester United to claim a 4-1 victory over Istanbul Basaksehir in the Champions League on Tuesday night.

The Portuguese playmaker has been in superb form for the Red Devils this season and he gave Manchester United the lead in the seventh minute at Old Trafford with a brilliant thunderbolt of a strike from a corner.

Fernandes then doubled Manchester United’s lead in the 19th minute with a simple finish, before Marcus Rashford made it 3-0 to the hosts with a penalty in the 35th minute.

The visitors pulled a goal back in the 75th minute when Deniz Turuc fired home a great free-kick – but Manchester United made it 4-1 when Daniel James tapped home Mason Greenwood’s pass from close range in second-half stoppage time. 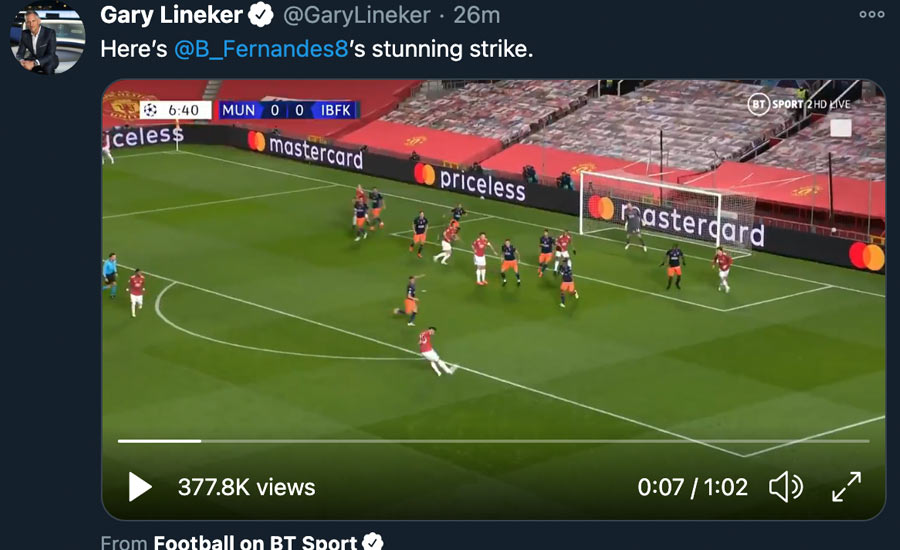 Speaking on BBC Radio 5 Live, Dublin said: “That’s what you like to see – you knew something was coming. I didn’t think it would be in the shape of a 20-yard half-volley from Bruno Fernandes.

“It’s a great strike. It’s an out-swinger, gets a touch on the near post and misses everybody out.

“It bounces on the edge of the box, it’s one of those as a player you know what you’re going to do.

“Aim the ball down into the ground and it ends up being in the roof of the net, what a strike.”

Fernandes, 26, has been a key player for Manchester United this season, having scored six goals and made three assists in the Premier League.

He will be hoping to feature for the Red Devils when they return to Premier League action with a trip to Southampton on Sunday afternoon.