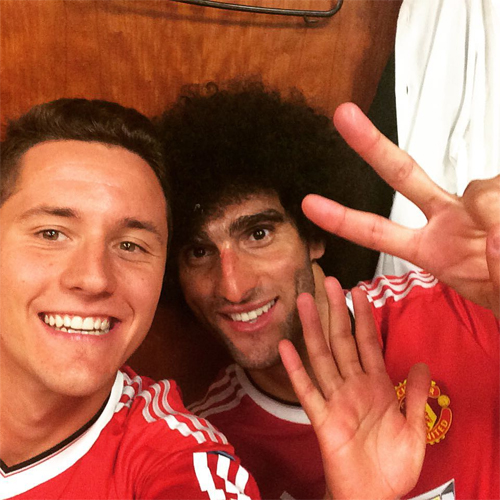 Phil Neville could not hide his delight as Manchester United continued their dominant start to the new season with a thumping 4-0 victory over Crystal Palace at Old Trafford on Saturday.

The Red Devils have been in fine form since the start of the campaign under Jose Mourinho and moved to the top of the Premier League table thanks to the win, ahead of Manchester City’s trip to Chelsea on Saturday.

Juan Mata gave Mourinho’s men the lead in the third minute at Old Trafford when he fired home from close range, before Marouane Fellaini made it 2-0 before half-time with a smart finish.

The Belgium midfielder then added a second goal shortly after half-time to make it 3-0 to the hosts.

And summer signing Romelu Lukaku continued his fine start to the new campaign by firing home in the 86th minute to wrap up a rampant win for the Red Devils and move them top of the table.

Former Manchester United defender Neville was keeping a close eye on proceedings at Old Trafford and could not stop himself from tweeting his delight as the goals flew in.

When Mata opened the scoring, he wrote on Twitter: “Mata always scores.”

Then, as Fellani added his strikes to the mix, he added: “Fellaldooooo.”

And Neville then revealed his delight as Lukaku got on the score-sheet with his 10th goal of the season, writing: “@RomeluLukaku9 is on 🔥.”

Manchester United return to Premier League action after the international break with a crunch clash at Liverpool on Saturday 14 October.