Manchester United are “really interested” in a deal to sign Ajax winger Antony in the summer transfer window, according to Italian reporter Fabrizio Romano.

The Red Devils are inevitably being linked with a whole host of potential signings at the moment as Erik ten Hag prepares for his first season in charge at the club. However, despite all of the media speculation, Manchester United are yet to make any new signings.

Perhaps unsurprisingly, the Red Devils are being linked with moves for some of Ten Hag’s former players at Ajax, with winger Antony and defender Jurrien Timber having been touted as possible targets for the Premier League club.

Now, Italian journalist Romano has taken to his social media accounts to reveal that the Red Devils do indeed hold a strong interest in signing Antony this summer, with the player’s representatives having asked Ajax to listen to offers for the attacking midfielder.

Romano says that Manchester United are not the only club interested in Antony but Ten Hag is “pushing” for the Red Devils to do a deal to bring the Brazilian to Old Trafford.

Posting on his personal Twitter account, Romano said: “Antony situation. Manchester United are really interested and already had contacts to explore potential deal – not the only club, but with ten Hag pushing.

“Been told player’s camp now asking Ajax to listen to bids for Antony this summer, even if price tag will be high.” 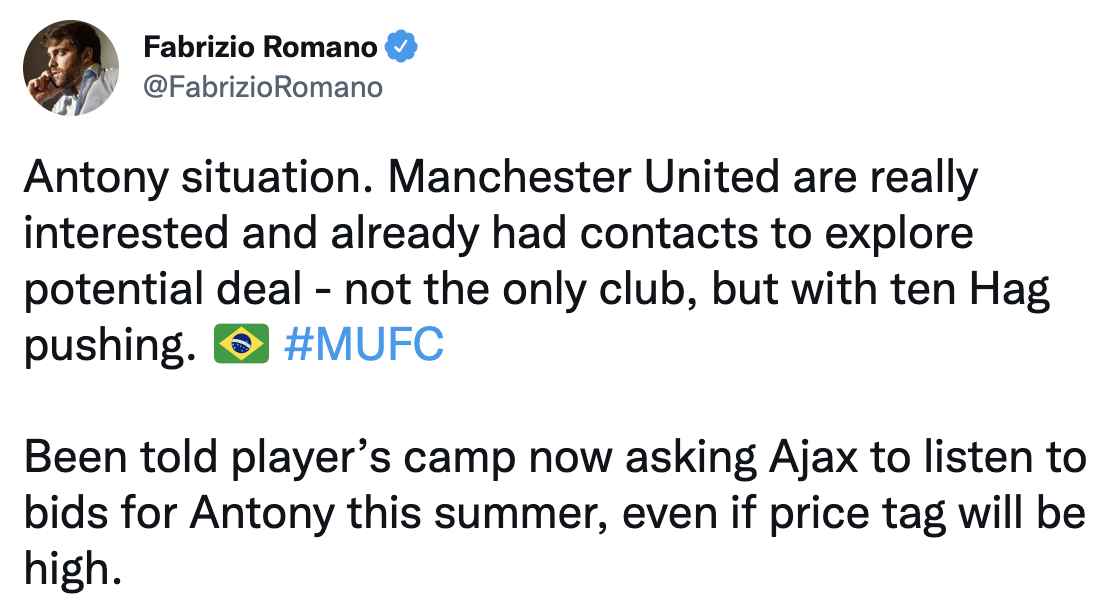 Antony has scored 23 goals in 79 games for Ajax since having joined the Dutch club from Sao Paulo in February 2020. He has netted two goals in nine games for the Brazilian national team.

Manchester United will be looking to bolster their midfield options this summer after having let Paul Pogba, Juan Mata, Nemanja Matic and Jesse Lingard all depart the club on free transfers.