Man United remain interested in a deal to sign Lisandro Martinez from Ajax this summer, according to Fabrizio Romano

Manchester United are yet to reach an agreement with Ajax for the transfer of defender Lisandro Martinez, according to Italian journalist Fabrizio Romano.

The Red Devils have been strongly linked with a move to bring the Argentine defender to Old Trafford this summer as Erik ten Hag looks to reunited with his former Ajax player at his new club.

The 24-year-old played a key role in Ajax’s title triumph under Ten Hag last season, scoring one goal and making three assists in 24 league games for the Dutch club and it now remains to be seen whether he will be on his way to England for next season.

According to Romano, Manchester United have tabled a fresh bid in the region of €50m for the defender – but that figure still falls short of Ajax’s valuation of the player.

Despite that, the Italian reporter says that talks between the two clubs will continue in the coming days as the player himself is keen on a move to England to test himself in the Premier League.

Romano says that the coming days could end up being “crucial” in deciding whether Martinez ends up moving to United this summer or not.

Posting on his personal Twitter account, Romano said: “Manchester United have still no full agreement with Ajax for Lisandro Martinez. New bid worth €50m, not enough yet – but talks will continue as Lisandro wants to try Premier League experience this summer.

“Next days will be crucial to understand Ajax final position.” 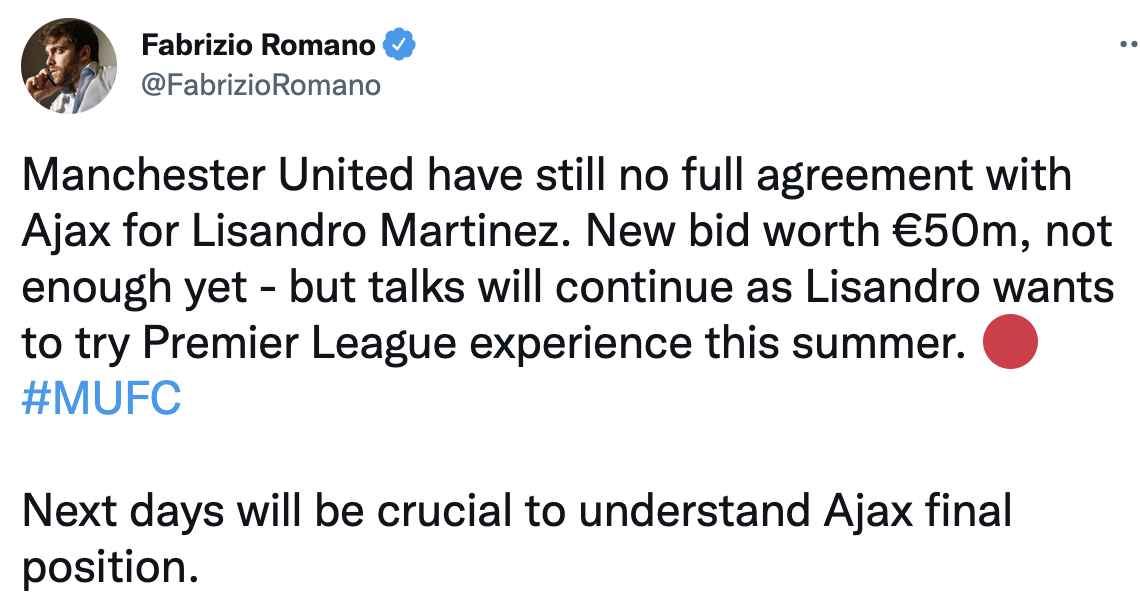 Martinez, who was born in Gualeguay, Argentina, has won two Dutch league titles – both under Ten Hag – since having joined the club from Defensa y Justicia in 2019.

He made his senior international debut for Argentina back in 2019 and and has been capped seven times by his country since then.