Man United and FC Barcelona are still in talks about a deal for Frenkie De Jong to move to Old Trafford, says Fabrizio Romano

Manchester United and FC Barcelona are still in talks about the structure of the add-ons in the proposed transfer of Frenkie De Jong to Old Trafford, according to Italian reporter Fabrizio Romano.

The Netherlands midfielder has emerged as one of the Premier League club’s top targets for the current transfer window and he has been regularly touted as a possible new arrival in the Erik ten Hag era.

De Jong has been widely reported to be one of the players Manchester United are looking to sign as they look to bolster their midfield following the exits of Paul Pogba, Jesse Lingard, Juan Mata and Nemanja Matic this summer.

However, despite plenty of media speculation, there has not been any official word from either club, and the player himself has insisted that he is happy at Camp Nou despite the talk about his future.

Now, Italian journalist Romano has taken to social media to provide his followers with a fresh update on the De Jong situation. Romano says that Manchester United have already agreed a €65m fixed fee with FC Barcelona, and talks are now centering on the structure of a further €20m in add-ons.

The Italian reporter also says that Manchester United have not yet discussed personal terms with De Jong, whose priority was always to stay at FC Barcelona.

Romano also claims that it would be “very unlikely” that De Jong would take a pay-cut in order to join the Red Devils this summer.

“Frenkie’s priority has always been to stay at Barca. Salary reduction ‘very unlikely’ option on Frenkie side.” 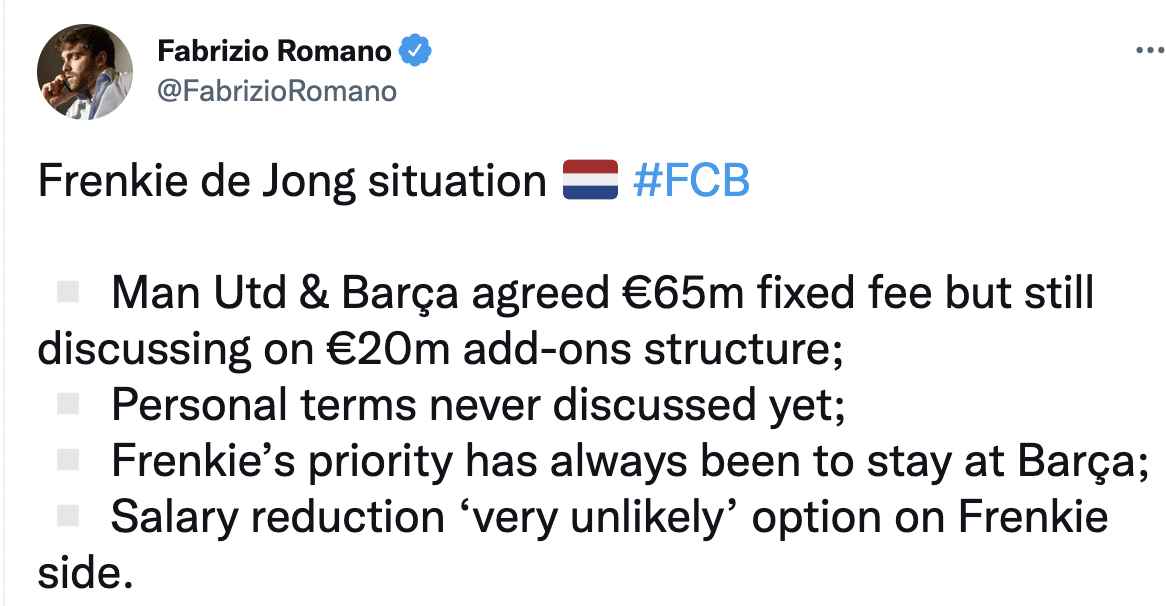