Paul Pogba issues update on his situation at Man United

Paul Pogba has taken to social media to insist that he remains committed to Manchester United following the recent speculation about his future.

Pogba’s future has once again been a talking point over the last few days after his agent Mino Raiola publicly stated that the French midfielder was not happy at Old Trafford.

The Frenchman’s situation at Old Trafford seems to have been a constant talking point since his big-money move back to the club in the summer of 2016.

Pogba played the full 90 minutes as Manchester United played out a disappointing goalless draw with Manchester City at Old Trafford on Saturday night.

The 27-year-old midfielder then took to social media to issue an update on his situation, insisting to his followers that he remains totally committed to the Red Devils in the present.

Posting on Instagram, Pogba wrote: “I’ve always fought and will always fight for @manchesterunited , my teammates and the fans. Bla bla is not important.

“The future is far, today is what matters and I am 1000% involved! Always strong together… all has been clear between the club and myself and that will never change.

“When you don’t know what’s going on inside don’t talk. #SpeakTheTruthOrRemainSilent #united #talktothehand.” 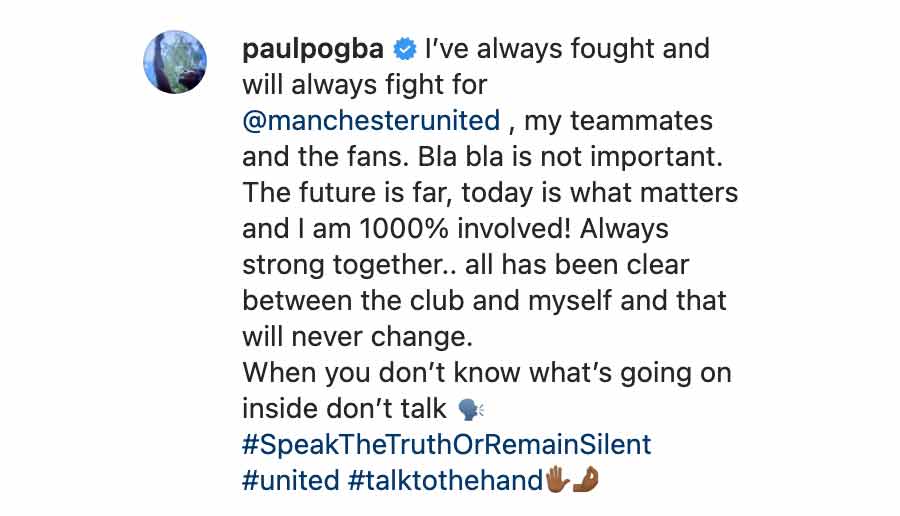 Pogba has scored one goal in nine Premier League appearances for Manchester United this season, but he has only started six games in the top flight this term.

Manchester United will return to Premier League action on Thursday night when they travel to face Sheffield United in the top flight.