Alvaro Morata has appeared to drop a big hint that a move to Manchester United is on the cards via a move on social media.

The Real Madrid forward has been heavily linked with a switch to Old Trafford after the past week or so.

Manchester United were initially thought to be in the market to sign Atletico Madrid striker Antoine Griezmann this summer.

However, the France international committed his future to los Rojiblancos earlier this month to deliver a blow to Manchester United’s transfer hopes.

Jose Mourinho is thought to have made Morata his top summer transfer target as the Manchester United boss looks to improve his attacking options.

And the 24-year-old fuelled speculation linking him with an imminent move to the Europa League winners in the summer transfer window.

Morata appeared to be caught ‘liking’ a photo on Instagram that urged his Madrid team-mates Gareth Bale and James Rodriguez to follow the Spain international to Old Trafford. 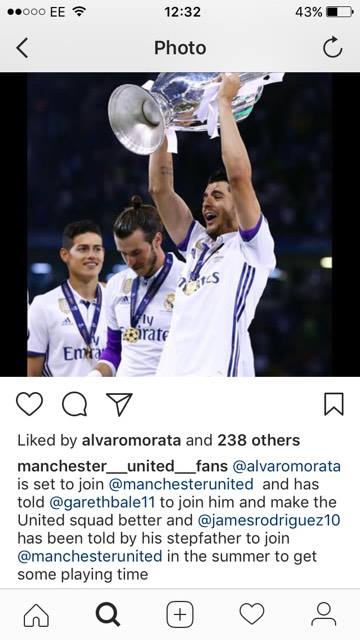