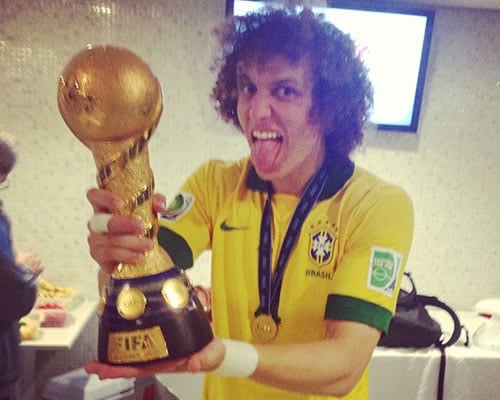 David Luiz posted this picture on Instragram after the 3-0 win Photo: David Luiz/Instagram

Fred scored twice and Neymar once as Brazil hammered world champions Spain to win the Confederations Cup on Sunday night.

Fred’s two strikes, one either side of a brilliant shot from Neymar, gave next year’s World Cup hosts victory and ended Spain’s three-year record run of 29 unbeaten competitive matches.

The showpiece at the Maracana inevitably prompted a huge reaction on Twitter – and here are some of our favourite updates from the professionals, both past and present.

England legend Gary Lineker (@GaryLineker) cannot believe the slow start Spain have made: “Spain have been dispossessed more times in 30 minutes than in their previous 30 games! #ConfedCupFinal”

Matt Le Tissier (@mattletiss7) is full of praise for Chelsea’s David Luiz as his stunning last-ditch clearance prevents Spain from drawing level with the score at 1-1: “What a piece of defending that was!!!”

As is Wales international David Cotterill (@cotterill_david): “Brazil are on fire!! Neymar is class”

English boxer Anthony Ogogo (@AnthonyOgogo) is blown away by Brazil’s brilliance: “Wow!!!!! This team is in imperious form. What a goal, what a first half performance. Who’s going to beat them next year?”

Chelsea’s Nathaniel Chalobah (@chalobah) believes “passion” is the key to Brazil’s success: “You can tell the brazillians are doing this for the people of their country. #passion football brings people together.”

Reading striker Jason Roberts (@JasonRoberts30) is stunned by Brazil’s imperious display against the world champions: “Brazil…….Somebody call the police!!! WOW….me and Royston are jumping on the Beds like we are kids #lovefootball”

Ex-Aston Villa man Ian Taylor (@IanTaylor7) soaks in the drama as Sergio Ramos misses a penalty with the score at 3-0: “Mmmmm…….penalty…. #spain…and they miss!!! What a game this is!! #confederationscup”

Coventry City’s Jordan Stewart (@jordanstewart3) chimes in: “Hulk can get offfffffff! But I prefer Lucas”