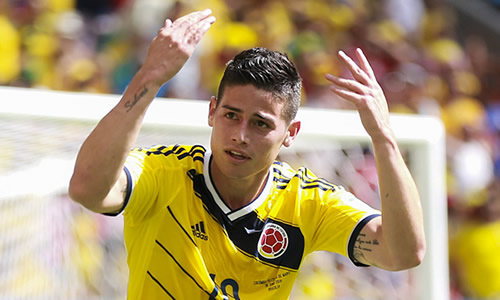 James Rodríguez has lifted the lid on his conversation with David Luiz after the final whistle following Brazil’s 2-1 victory over Colombia.

The hosts set up a semi-final clash against Germany thanks to goals from centre-halves Thiago Silva and David Luiz, before Rodríguez ensured a nervy finish with a spot-kick 11 minutes from time.

The Monaco midfielder, who has been Colombia’s standout performer at the World Cup and is a strong contender to win the player of the tournament, was in tears at the final whistle.

And Luiz, who completed a switch to Paris Saint-Germain from Chelsea earlier this summer, was quick to comfort the 22-year-old midfielder.

“He told me I was a good player,” Rodríguez told reporters.

“The truth is that having so many superstars hugging me did make me happy. We have to raise our heads now and thank Colombia for their support.

“We are sad because we wanted to keep going and set new records. We gave everything to reach the semi-final, but we have to be proud because we played a great side.”

The Colombia midfielder, who scored six goals and made three assists at the World Cup, has been heavily linked with a move to Manchester United and Real Madrid in the summer transfer window.