Man United transfers: Thiago Alcantara has moved to play down speculation suggesting he could be set for move to Old Trafford 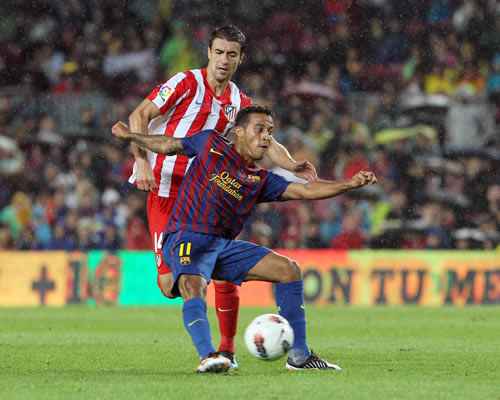 Thiago Alcantara has only made 15 league starts this season Photo: FC Barcelona

Thiago Alcantara has moved to play down speculation suggesting that the Barcelona midfielder could be set for a summer transfer to Manchester United.

United have been linked with a £15m bid for the 22-year-old midfielder in recent days and Red Devils goalkeeper David De Gea is reportedly keen to see him move to Old Trafford.

But despite being limited to just 15 La Liga starts with Barcelona this season, Thiago insists he is happy at Camp Nou.

“As I live my life, I am very happy,” Thiago said. “I really enjoy being at Barcelona because my experiences have been very good.

“My future? We’ll see how things are after the [Under-21] European Championships.

“David De Gea wants me at United? Each player wants what is best for their team. Like I say that hopefully he will come to Barca, he says the same about me.

“I think it is not something to take too seriously.”

Thiago signed a contract to keep him at Camp Nou until June 2015 back in 2011, with a buyout clause of a staggering €90m.