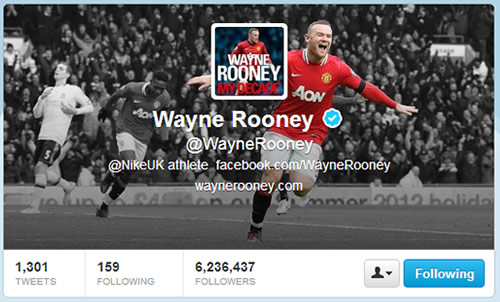 Wayne Rooney has rubbished suggestions he deleted the phrase “Manchester United player” from his Twitter profile amid reports linking him with a move away from Old Trafford.

It had been claimed that the striker had deleted the name of his club from his profile, which now simply reads “@NikeUK athlete”.

But the 27-year-old, who reportedly handed in a transfer request at United a fortnight ago, insisted that his Twitter account never featured his club’s name.

A statement from Rooney released on Friday read: “There’s a load of rubbish being written about me changing twitter bio saying I have deleted Manchester United from it.

“I have never deleted Manchester United from the bio whatever the papers are saying because it was never on there.

“All that happened was that I was asked by Nike to add @nikeuk to it – the same as many other sportspeople they sponsor. Funny, no-one’s written about that though!

“That change was made THREE weeks ago and yet people are talking about it as if it’s something that was put up yesterday.”

A spokesperson for Nike said: “In April, we asked Wayne Rooney and other Nike sponsored athletes to add @nikeuk on to their profiles due to changes in ASA (Advertising Standards Authority) guidelines relating to athletes and social media.”

The striker did not however respond to the speculation that he wants to leave Old Trafford this summer.