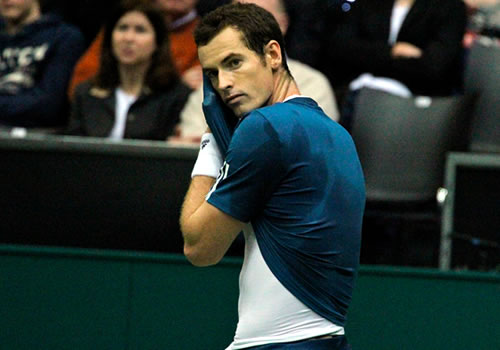 Andy Murray and Marin Cilic, separated by just eight months in age, have a rivalry that goes back seven years—and have played each other in every one of those years since 2007.

And while Cilic had thus far won just once in 10 face-offs, their contests had often gone to the wire.

So far this season, Cilic was rediscovering some of his best form. He had played and won 14 successive sets in winning the Zagreb title last week and beating Lukas Rosol and Jo-Wilfried Tsonga in Rotterdam.

Not surprisingly, then, Murray was well aware of the danger. “Cilic is obviously playing extremely well just now, extremely confident, I can’t afford to lose concentration at all.”

It had also been tricky to work out just what shape Murray was in. He pointed out after his long second-round match that it was the first time he had played matches on consecutive days since his back surgery last September:

“Hopefully coming through matches like that I’ll start to be able to take my opportunities a little bit better. But it’s been a good start for me. To play at least three matches in three days is good for my body as well.”

He had also talked of adding Rotterdam to his schedule to get more court-time. How would he cope against the in-form, match-sharp Cilic?

Right from he word go, Cilic seemed to have Murray at his mercy, both with his outstanding serving and with his driving ground strokes, flat and clean, wide to the Murray backhand.

A quick look at the Croat’s stats for the season so far showed that he stood atop the aces ranking with 145, so there was no reason for Murray to berate himself for seeing ball after ball flash past him, but he did. Cilic dropped just two points in 19 first serves, so when he made a quick break in the second game, it was near impossible for Murray to pull it back, and Cilic served out with a love hold after just 27 minute.

Murray had the advantage of serving first in the second, and sniffed a chance of a break in the fourth game when Cilic went 0-30 down, but sure enough, four winning serves saved the day, and Murray kept up a constant monologue to himself.

I didn’t get off to a good start in the first set, and he served extremely well throughout the match

Cilic immediately turned the tables to earn two break points but let Murray off the hook with a couple of errors. But Cilic got another chance and this time took it, and Murray roared at himself in fury.

It then looked briefly as though Murray was beginning his fight back. He attacked the net, helped by Cilic missing a few first serves—the Croat’s level dropped to 53 percent. But standing at 40-0 on the Cilic serve, he was burned three times in a row on the backhand wing. A fourth bite of the cherry also went begging after the rally of the match, but Murray’s chance was blighted by a net cord that left him open to a winning lob from Cilic. One more ace, and the chance was gone.

Cilic did not make another major error and after just an hour and 11 minutes, served out in the calmest of manners.

“I didn’t get off to a good start in the first set, and he served extremely well throughout the match,” said Murray. “But kind of like yesterday I created a lot of opportunities to break serve, and wasn’t able to convert my chances and when he had his chance he took it.”

The British No1 added: “I’m trying to take positives from the entire week. It’s first time I’ve played three days in a row since the surgery. My body feels pretty good, considering it was bit stiff when I got up this morning. But after warming up an going on court, I felt fine, so that was a good sign.”

And so just one seed remains in the Rotterdam draw. Tomas Berdych will face the on-fire Ernests Gulbis while No37 Cilic faces home hero and wild card, Igor Sijsling, who was a surprise winner over Philipp Kohlschreiber.

Cilic, it should not be forgotten, is a former top-10 player and has recently had his corner bolstered by the addition of Goran Ivanisevic as coach. Now with 16 sets in a row to his name, and playing such high quality and near flawless tennis, he will surely be favoured to reach the final.