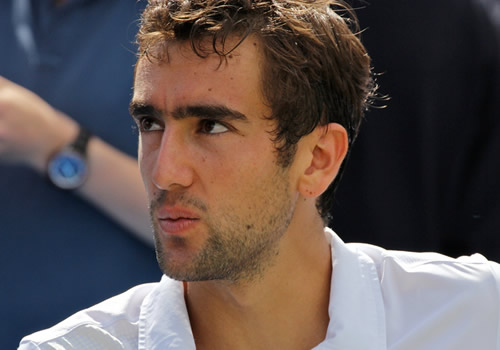 Marin Cilic has been struggling with an arm injury Photo: Marianne Bevis

With the first Grand Slam of the year, the Australian Open, beginning in exactly two weeks’ time, the news that world No9 Marin Cilic is still hampered by injury will be a blow both to the tournament and to the man who broke through tennis’s ‘glass ceiling’ last September to claim his first Major at the US Open.

Cilic’s spokesman, Igor Rajkovic, has revealed that the Croat has undergone an MRI scan in Zagreb, which showed that “after some 20 days of therapy the situation with the [right upper arm] injury has improved.”

Reports emanating from Croatia had suggested that Cilic was already out of the Australian Open, but he added to ABC: “Since there is very little time for a full recovery and training, my appearance at the Australian Open is unfortunately under a big question mark. [But] I have not cancelled my appearance in Melbourne. I will leave it for another seven to eight days to see how the situation will develop.”

Cilic was scheduled to appear in this week’s Brisbane International 250 tournament, one of the first events in the Australian Open Series, but he pulled out ahead of a draw that boasts the two men he beat in the semis and final in New York, Roger Federer and Kei Nishikori.

Cilic, who broke into the top 10 for the first time in four and a half years with that US Open title, has also withdrawn from next week’s World Tennis Challenge in Adelaide, another Australian Open Series event that brings together current and past stars of the game in singles and doubles matches across three days of competition.

Last year, Cilic reached the quarters in Brisbane but lost in the second rounds in Sydney and Melbourne. However, his partnership with former Wimbledon champion Goran Ivanisevic bore fruit come the indoor season—Cilic reached the Rotterdam final and won in Delray Beach—and come Wimbledon, he threatened to beat Novak Djokovic in their five-set quarter-final.

But after his break-through run in New York, where he beat Tomas Berdych, Federer and Nishikori back-to-back without dropping a set, Cilic struggled to replicate his form in the Asian swing, and after picking up the indoor Moscow title, he missed the Paris Masters, also with a right arm injury. He went on to lose all three round-robin matches in his debut World Tour Finals.

Nevertheless, Cilic did represent the UAE Royals in all four cities on the inaugural IPTL tour, though he played little during the final leg due to injury. However he stressed that he saw his participation as an integral part of his off-season training.

He told Reuters: “I had 10 days off after [the World Tour Finals] and had started training again, and this is just part of that. I am still doing my own things, playing and practising, so the matches in the afternoon just add to that… The format is not too tiring, the matches go quick… [but] the most important thing for me is that I am in a team with Goran, so we can be on the same schedule all the time.”

In 2014, Cilic put together some of the best statistics on the tour: among the top five in match-wins, hard-court wins, and finals played (five); and second only to Federer for indoor match-wins.

So missing the entire Australian swing ahead of his valuable indoor season, if that is what transpires, could prove to have a serious impact not just on Cilic’s early-season momentum but also on his top-10 ranking.