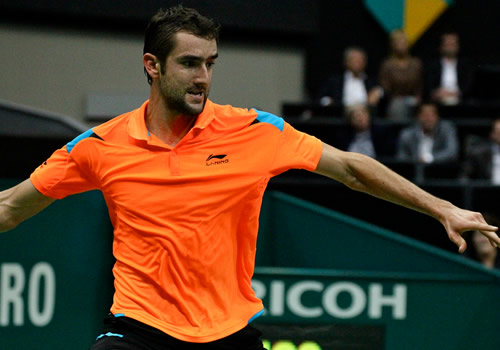 Marin Cilic has confirmed he is unable to play in the Australian Open, which gets underway next Monday.

The World No9, who broke through tennis’s ‘glass ceiling’ to claim the title at the US Open in September, has been troubled by a shoulder injury since last autumn.

I am really sad that I won’t be able to participate in Melbourne, especially after winning the last Grand Slam in New York

Warning bells rang last week when he pulled out of Brisbane and from his final warm-up for the Australian Open, the Adelaide Challenge, a three-day exhibition-style event that got underway today.

Cilic broke into the top 10 for the first time five years ago after reaching his first Grand Slam semi-final in Melbourne, and he returned, at No9, after his 2014 New York run, where he beat Tomas Berdych, Roger Federer and Kei Nishikori back-to-back without dropping a set.

But the Croat struggled to replicate that form in the Asian swing, and after picking up the indoor Moscow title, he missed the Paris Masters, also with a right shoulder injury. He went on to lose all three round-robin matches in his debut World Tour Finals.

Nevertheless, Cilic did represent the UAE Royals in all four cities on the inaugural IPTL tour, though he played little during the final leg due to injury. He has since stressed that he saw his participation in the IPTL as an integral part of his off-season training.

In announcing his withdrawal from Melbourne on his website, Cilic said:

“The right shoulder injury, that has hampered me for some time now and forced me to withdraw from the ATP event in Brisbane, is improving day by day, but I still don’t feel fit enough to be able to compete at the highest level.

“I am really sad that I won’t be able to participate in Melbourne, especially after winning the last Grand Slam in New York, but I was advised by doctors to be careful as much as possible to avoid even more serious problems.

“I have received lots of support letters from my fans worldwide lately, and I am grateful for your support and best wishes. I was really looking forward to be back on court in Australia and now I hope we will meet very soon in Zagreb.”

Cilic’s withdrawal comes a week after world No12 Jo-Wilfried Tsonga pulled out with a right arm injury. Further down the rankings, No41 Jack Sock, No73 Radek Stepanek and No75 Tommy Haas, are also out with injury.

But every cloud has a silver lining. Briton James Ward, who has this season risen to a career-high ranking just outside the top 100—currently 102— will gain direct entry to the Australian main draw, the first time he has done so at a Grand Slam.

The 27-year-old Ward was sixth reserve when the entry list was announced, and has advanced beyond qualifying only once in his six years of playing Melbourne: He lost in the first round in 2012.

Ward is the first British male singles player apart from Andy Murray to earn direct entry into a Grand Slam since Tim Henman at the 2007 US Open.

Fellow Britons Kyle Edmund, Liam Broady and Brydan Klein, along with Ireland’s James McGee and Louk Sorensen, will begin their campaigns to join Ward when qualifying begins this Wednesday.

Sorensen, who is in the top half of the 128-man draw, opens against the No31 seed and could play Ryan Harrison in the second round. Broady begins against No9 seed Farrukh Dustov, while the other three compete for a single main-draw place in the same eight-man section.

Heather Watson is the only British female in the main women’s draw, and enters the Australian Open on the back of a couple of strong wins: over Casey Dellacqua in the Hopman Cup, and today over No5 seed Sloane Stephens to reach the quarters in Hobart.