Wimbledon 2013: Marion Bartoli admitted that she had to dig deep to book her place in the last four with win over Sloane Stephens 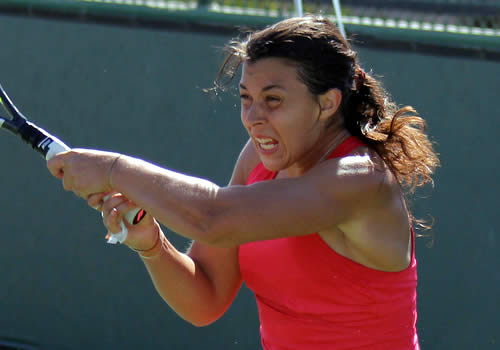 Marion Bartoli admitted that she had to dig deep to book her place in the semi-finals at Wimbledon after she beat Sloane Stephens 6-4 7-5.

The 15th-seeded Frenchwoman remains on course to reach a second SW19 final after she emerged victorious from a rain-interrupted match against the 20-year-old American on Court No1.

“I thought I could have done better even today,” said Bartoli. “I could have closed out the match before.

“I really thought she played some amazing shots, especially when I was leading that game 5-3. She came up with some backhands down the line that were really amazing. I thought she fought extremely hard.

Bartoli, 28, will face Kirsten Flipkens for a place in the final after the Belgian overcame 2011 champion Petra Kvitova in three sets on Centre Court.

She added: “Tennis is kind of a crazy game, and now I am playing Kirsten Flipkens to be in the final of Wimbledon. So it’s also very unexpected, but that’s also the magic of it.”