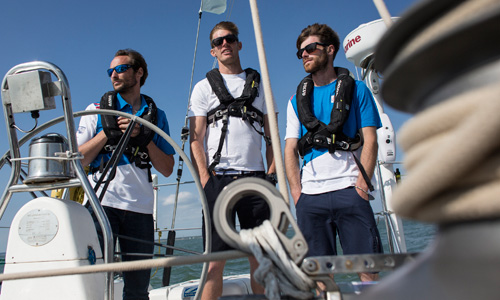 He was his hero growing up, then he was a training partner ahead of the Beijing and London Olympics, but now Clitheroe sailor Mark Andrews is desperate to emulate Sir Ben Ainslie in Team GB colours.

Just one British sailor can represent Team GB in the Finn class at the Rio Games in 2016 and emulate the achievements of Ainslie – arguably the world’s greatest ever sailor with four Olympic golds to his name.

And with four British Finn sailors in the world’s top ten, including Andrews, September’s World Championships in Spain will be the first key indicator as to who will represent Team GB come Rio.

It’s someone else’s turn to step up. All our names are in the hat, you’ve just got to do the business and show what you are made of.

Ainslie’s heir apparent is far from obvious, a host of Brits are fighting it out for the one Olympic Finn spot, with Ed Wright, Giles Scott, Andrew Mills and Andrews all evenly matched.

But Andrews, competing at the weekend’s J.P. Morgan Asset Management Round the Island Race, is determined to take his chance and put down a marker following Ainslie’s decision to turn his back on the Olympic Games and concentrate on other projects.

“We’re building up towards Rio and the Olympic Games now,” said Andrews. “We’ve got a World Championships in September in Santander, and all the Olympic sailing classes will be there.

“It’s a huge event; it’s the first step on our trials to Rio so we’re hoping to do well there.

“With the Finn class we’ve got four guys in the top ten in the world who are all capable of winning regattas and have all won regattas.

“Someone has got to step up and put your name down. I think whoever wins that World Champs will be in prime position for the Games.

“There is only one spot. Four into one doesn’t go. In previously years, we’ve had the likes of Ben and Iain Percy who have done the business.

“It’s someone else’s turn to step up. All our names are in the hat, you’ve just got to do the business and show what you are made of.

“It would be amazing to get on the team; it’s obviously a long way away. It’s not about going, it’s about winning.

“I think that’s a big thing. For us sailing in the UK, it’s not all about the competing, it’s about all the winning and taking home that medal. It’s a big weight on your shoulders.”

In 2013 Andrews was part of Ainslie’s crew that broke the multihull record during the J.P. Morgan Asset Management Round the Island Race, completing the event in 2hrs 52mins.

With very different conditions at the weekend and a lack of wind hindering all competitors, it was a very different story all-together this time around but for Andrews it was simply the challenge of stepping away from his normal single-handed Finn and being part of a team.

“This was my fourth time at Round the Island,” he added. “I’ve done it twice with Ben. We broke the record last year with Ben so I’m excited to be here again, it’s a great event.

“With a dinghy background, I sail Finn so I’m the same as Ben. I was his training partner for the last two and a bit Games.

“This is more a what we call an insure race, a bit different to what we do day to day which is up and down round buoys round and round in circles.

“This is different, it’s round the island obviously and there are a lot of different factors, tide and wind as its quite a long race for example.

“We were not going to be setting any records; I think the challenge was just to get around.”

The J.P. Morgan Asset Management Round the Island Race is one of the largest participation sporting events in the UK and the largest yacht race of its kind in the world. Organised by the Island Sailing Club in Cowes, it is dubbed ‘Britain’s favourite yacht race’, regularly attracting around 1,500 boats and 16,000 competitors www.roundtheisland.org.uk