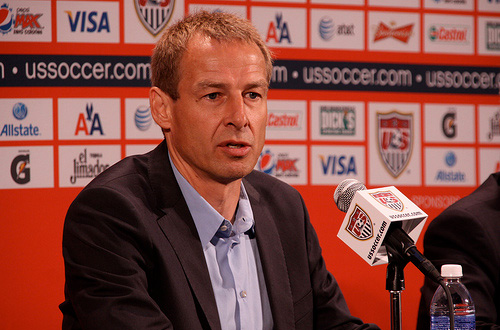 Mauricio Pochettino is the right man for Tottenham Hotspur, according to Jurgen Klinsmann.

The Spurs manager has come under pressure after suffering a fourth home Premier League defeat of the season on Sunday.

However, former Tottenham striker Klinsmann says the Argentine needs a couple of transfer windows to turn Spurs into a success story.

“He’s a high quality, talented coach. Everyone going to a new club, and a new environment, needs time to get their head around things.

“Sometimes it takes two years and others it can be four or five years. That’s a long time for impatient media people and fans but he has all the qualities to build something very special here at Spurs. I hope he is given the time.

“He needs a couple of transfer windows of his own to put the pieces together that he wants to. He has a specific way that he wants the team to play and that’s orientated by some of the best teams in the world.

“He’s showed with Southampton that his system works but now he has a different category of players. Working with different characters is not easy.

“The bigger the club the more egos there are. You need time and patience. I hope he gets all the time he needs.”