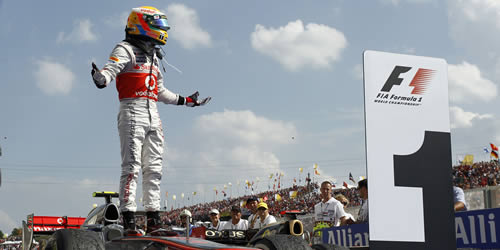 McLaren are locked in talks with Lewis Hamilton over a new contract and are “closer” to agreeing a deal, the team’s managing director Jonathan Neale has revealed.

The 27-year-old’s future has been a subject of constant speculation this year, with his contract set to expire at the end of the current season.

Hamilton has been linked with both Red Bull and Mercedes in recent months, but Neale insists talks are progressing well and hinted that he expects to see the Briton commit to the team.

“We are closer,” Neale told Sky Sports News. “And of course we are in dialogue at the moment, but for obvious reasons I can’t speculate more than that at the moment.

“We are working very hard to find a common ground there.”

And when asked if both sides want to extend Hamilton’s stay, Neale replied: “Very much so. Very much so.”

Hamilton is currently fourth in the drivers’ standings, 47 points behind leader Fernando Alonso ahead of the Belgian Grand Prix in a fortnight’s time.

But Neale is confident Hamilton is still in with a good chance of winning the title this season and has backed him to push the Ferrari driver all the way.

“Mathematically [the championship is] still possible. Twenty-five points for a win is a good place to be and it doesn’t take much to switch those.

“We’ve got a quick car – our car was in better shape than the Ferrari at the last race. He’s a fighter, he loves a challenge, he just needs a sniff at it to feel that the team is behind him and pushing.

“I think as long as he feels that we are pushing the upgrades of the car and dealing with the issues as they arise he’ll fight to the end.”

Vaughan: It’ll be a long time before Pietersen returns to England set-up

England v South Africa: We could be better without Pietersen – Bresnan