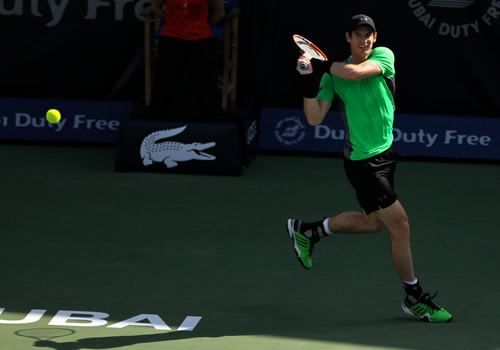 Andy Murray and Tomas Berdych, both former finalists in the prestigious Dubai Duty Free tournament and the number three and four seeds respectively this week, will both be expecting formidable challenges by the end of the week in the shape of six-time and defending champion Roger Federer and four-time champion Novak Djokovic.

Fortunately for both, neither would need to play a seed before those scheduled semi-final showdowns.

Murray was due to play No8 seed David Goffin in the quarters, but the talented Belgian, carrying an injury from last week, had the misfortune to meet the unpredictable talent of wild card Marcos Baghdatis in his opener, and lost in straights.

Berdych was lined up to meet No5 seed Ernests Gulbis, though with five straight losses in a row for the Latvian ahead of Dubai, it was perhaps less of a shock that his difficult patch of form should extend through the switch from indoors to the desert. He too lost in straights to Denis Istomin.

But before looking too far ahead, Murray and Berdych had other hurdles to leap.

The Briton took on Joao Sousa, ranked No50 but as high as 35 nine months ago. By chance, they had met only weeks ago in the third round of the Australian Open, and Murray beat him in straight sets—just as he did the year before, and in their other two interim matches.

But Murray was wary: The Portuguese beat two higher-ranked opponents in Melbourne and in reaching the semis in Montpellier a fortnight ago:
“I played Sousa a few times. He’s a tough opponent. He fights hard. In Australia, even though I was playing very well the first couple of sets, he still hung in. I was up two sets and a break, and he kept fighting and got himself back into the match there. I would say that’s one of his biggest strengths.

“I will need to play a solid match and be ‘on it’ throughout, because if you let your level drop, he takes advantage of it.”

Murray would play for the first time in the heat of the afternoon, as well, and he had noticed already how fast these courts were playing:

“It’s a quick court… I would say quicker than the Australian Open, although it probably doesn’t seem it because the ball flies here through the air… You’ve got to really be careful here and concentrate on your timing and make sure you’re feeling the shots well.”

Such conditions were likely to suit the big-hitting game of Berdych even more, and he too would need to be ‘on his game’ against the in-form Italian Simone Bolelli, ranked 52 but up from 328 this time last year. Aside from winning his first Grand Slam doubles title in Australia this year, he beat Milos Raonic in last week in Marseille. On his game, the Italian can produce testing tennis.

Berdych, too, was wary: “He’s definitely the guy that’s playing really well these last couple of weeks. I mean, winning the doubles title in Melbourne, it also gives you a lot of confidence for your singles. It’s not going to be an easy one to play, especially in these fast conditions. That’s what he likes. So I’m going to definitely have to bring my better game and just try to go for it.”

And Berdych had a little extra incentive to win this particular match: It would be his 500th match-win. Only seven other active players on the tour have reached that land-mark—and two of them are those top seeds in Dubai, Federer and Djokvoic.

In the event, Murray need not have worried about his progress. He hit the court and the ball with fluidity and confidence right from the off, while his hapless opponent could barely get a point on the board. Murray broke in the first game courtesy of a double fault and broke twice more. After 21 minutes, the Briton had scored 24 of the 34 points in the 6-0 set.

Not until the ninth game did Sousa get on the board, to a combination of jeer and cheer from the crowd. Even when Murray missed a shot, the perfectionist in him berated himself, yet Sousa would manage just one more game as frustration took a hold and the errors flowed.

Murray explained that it was, however, necessary to remain ruthless in the face of such odds: “I have been through matches like that, obviously recently at the O2, and it happens. I know how it feels when it’s happening to you. But you don’t see players letting up when you’re the one that’s in that position. So I obviously understand the frustration, but… you just try to keep doing what you’re doing and take care of your side of the court.”

Now it was up to Berdych to try and do the same.