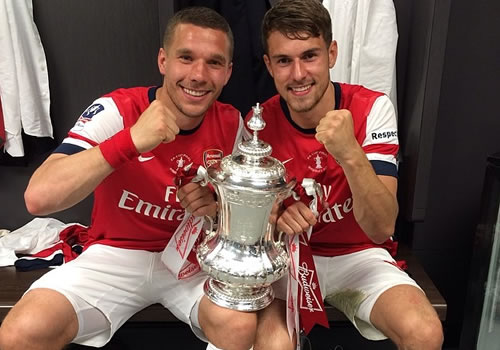 Arsenal ended their nine-year wait for a major trophy by winning the FA Cup following a dramatic extra-time victory over Hull City at Wembley.

Hull stunned the north Londoners by going 2-0 up inside the first eight minutes at Wembley as James Chester and Curtis Davies scored following set-pieces.

Santi Cazorla’s free-kick in the 17th minute got Arsenal back in the game and Laurent Koscielny equalised from close range in the 71st minute.

Arsenal then dominated extra-time and Aaron Ramsey sealed the glory with a precise finish in the 109th minute.

The cup final inevitably prompted plenty of activity on Twitter – and here are our favourite updates, in chronological order.

Arsenal striker Nicklas Bendtner (@bendtnerb52) is looking forward to the game: “Magnificent moment today. Believe it’s gonna be it this time. Wish I was part of the team. #COYG”

Liverpool defender Glen Johnson (@glen_johnson) is shocked by the 2-0 scoreline: “Just checked the scores, thinking nothing would of happen yet! Wow, what a final this could be….”

Gary Lineker (@GaryLineker) chimes in as Ramsey nets the extra-time winner to spark wild scenes of celebration: “The biggest moment for a Ramsey at Wembley since 1966!”

Liverpool legend Dietmar Hamann (@DietmarHamann) praises the Gunners: “Congratulations to Arsenal for showing great character to come back from 2 down. Credit to Hull for pushing them all the way.”

Former Manchester United defender Gary Neville (@GNev2) gives his post-match thoughts: “Wish Brucey had won but also something pleasing about Wenger being given 9 years to return to the podium. I like the story..”

Per Mertesacker (@mertesacker) is the first of the Arsenal players to take to Twitter: “FA Cup … Bloody Hell !!! So proud of this team and this fan support. Thanks!!! @Arsenal #GunningForTheCup”

Arsenal forward Lukas Podolski (@Podolski10) tweets his delight: “Great feeling, here is the CUP! Thanx Fans ! you rocked Wembley and pushed us back into the game!! #facup #poldi #aha ”

And Arsenal playmaker Mesut Özil has the final say: “Yeeeah! We did it! FA-Cup Champions 2014!!!”