Mesut Ozil: My secret to assisting success at Arsenal 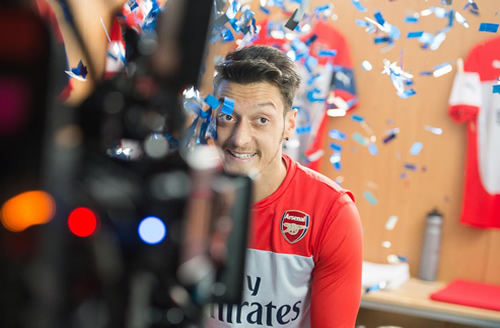 Mesut Ozil attributes his accurate passing down to an “instinct” rather than practice.

The Arsenal playmaker enjoyed an impressive second half of the season for the north London club after missing a large portion of the campaign due to a knee injury.

Ozil had a starring role in Arsenal’s FA Cup final victory over Aston Villa last month and recently notched up a hat-trick of assists in Germany’s 7-0 thrashing of Gibraltar.

The World Cup winner says that he aims to have a “surprise” impact with his passing as he tries to set up goal-scoring opportunities for his team-mates.

Speaking to Arsenal Player, Ozil said: “Sometimes I see passes and other players might be surprised and wonder how I saw it.

“My aim is to have that surprise effect on the pitch and find gaps that only very few players can.

“When you have that surprise instinct on the pitch, it’s tough for the opposition to stop the passes.

“It’s important to have that and it’s why I sometimes see spaces to pass into, because I’ve already thought about where my team-mates could run and how I can make the most of that millisecond, think a tick faster than the opposition and find the gap.

“A while ago I was on Instagram and saw that a fan had made a graphic showing what other players see and what I see. I found that really interesting.

“I think the things that I sometimes see come from an instinct and you can’t really learn that, though you can work hard at passing. I spontaneously decide on what I’m going to do and maybe see spaces that other players don’t.”

He played most of last month’s FA Cup final triumph after scoring four goals and notching up five assists for the Gunners as Arsenal finish third in the Premier League table and qualified for the group stage of next season’s Champions League.